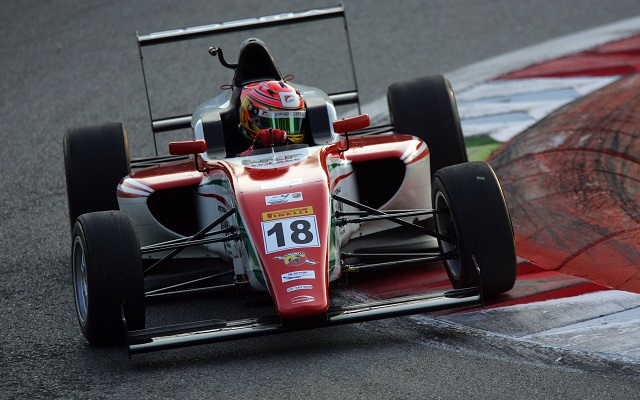 Recently crowned Italian F4 champion Lance Stroll was fastest in the two? practice sessions held on Friday within the sixth round of the 2014 season at Monza.

The 15-year-old Ferrari Driver Academy member?swapped fastest times with BRDC F4 frontrunner Sennan Fielding in the first session. Fielding, who is driving in his first Italian F4 round this season, had to ultimately settle for second, albeit just 0.065 seconds behind the Canadian.

In the second session, Stroll was quickest yet again, under a tenth faster than Prema teammate Brandon Maisano, who had earlier been fourth quickest in the morning.

Times in the second session were quicker for most drivers, with Fielding being the sole exception, as the Briton could only manage eighth fastest in the afternoon, in his Euronova car

Brazilian Joao Vieira was third quickest for Antonelli in both sessions, whilst his teammate Andrea Russo, only eleventh quickest in the morning, made huge strides to go fourth fastest in FP2.

Cram trio Mattia Drudi, Edi Haxhiu and Robert Schwartzman were fifth, sixth and seventh quickest. Russian driver Schwartzman is also a newcomer to the series here, although he had previously topped the times in the first pre-season test in May.

Jenzer Motorsport’s Swiss drivers Lucas Mauron and Alain Valente were eighth and ninth fastest in the first session, and brought up the top ten behind Fielding in the afternoon, with Matteo Desideri tenth quickest in FP1.