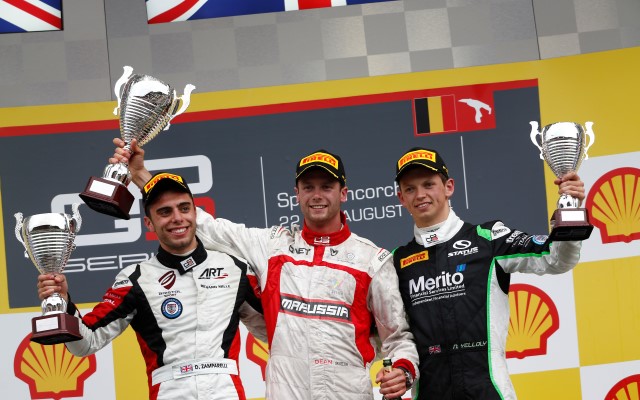 Dean Stoneman scored his second win of the GP3 season in a wet-dry opening race of the weekend at Spa-Francorchamps after Matheo Tuscher spun out of the lead.

The start of the race had to be delayed after sixth-placed qualifier Marvin Kirchhofer crashed into the barriers on the run to Eau Rouge on the formation lap. With the track drying after earlier rain, the ART driver had been the furthest up the grid to select slicks – a decision which would have proved to be correct but for his error.

The top six were not initially willing to gamble their strong grid positions by going for slicks, although title rivals Richie Stanaway and Alex Lynn pitted from fourth and fifth respectively at the end of the second attempt at the formation lap, having realised they had chosen wrong.

Patric Niederhauser was the highest-placed slick runner when the race began and got a better start than those ahead of him on the well-drained grid, but threw his chances away when he went into turn one too quickly and slammed into Jimmy Eriksson, taking both out of the race.

Emil Bernstorff took the lead from shock pole-sitter Luca Ghiotto, but pitted himself at the end of the first lap. Ninth-placed qualifier Tuscher was the leading slick-shod runner and began carving his way up the order. Once up into second, he quickly cut the gap to Ghiotto and took the lead at Rivage on lap five.

Tuscher seemed poised for his first win for 23 months (since his F2 days) as he extended his lead over Stoneman, but the 17-year-old would push too hard.

Taking Eau Rouge for the eighth time, he lost control of the rear of his car, seemed to gather it back up into a straight line but then lost it again on the wet run-off area at the top of the hill. He managed to keep the car out the barrier on the outside, and out of Stoneman’s path as he rolled back onto the track, but was then stranded on the racing line over the brow of the hill. Despite some close calls, the following cars managed to somehow avoid ploughing into the back of him until the safety car neutralised the field and allowed Tuscher to be recovered.

After the restart, Stoneman retained the lead – although there was more chaos to come as the chequered flag was not shown when it was expected. The field continued racing until they were shown the red flag.

Stoneman was the winner, following up his success from Barcelona. Dino Zamparelli scored his third second-place finish in the space of four races, and Nick Yelloly got the eighth podium of his career.

Jann Mardenborough made it a British lockout of the top four places ahead of Pal Varhaug and Alex Fontana, who both finally got their first points of the campaign.

Fontana was challenged at the restart by Stanaway, who had got up to seventh after his early pitstop. The Kiwi got ahead briefly but then found himself having to defend from Lynn, who had made similar progress up the order. Stanaway held on to seventh, as Lynn collected the reverse grid pole position for Sunday’s race.

Bernstorff threatened to beat both Stanaway and Lynn to a top eight place but had to settle for ninth, with Riccardo Agostini tenth.