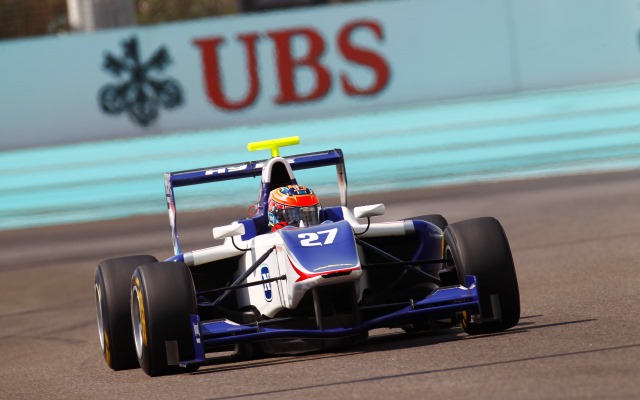 Dean Stoneman followed up his outstanding return to single-seater racing in GP3 in Abu Dhabi last weekend as he topped the timesheets on the morning session of the post-season test at Yas Marina.

Remaining with the Koiranen GP team, Stoneman posted a time of 1m56.278s. That put him three tenths of a second ahead of Patric Niederhauser, who is driving for the Jenzer Motorsport outfit he’s driven for for the past two years.

Dino Zamparelli finished third having switched from Marussia Manor to MW Arden, with GP2 runner-up Sam Bird fourth as he helps Russian Time get to grips with the old Bamboo Engineering cars.

Melville McKee was seventh on his return to action with Marussia Manor, having departed Bamboo ahead of the final round of the season. Alex Fontana, who’s switched from Jenzer to ART for all three days of testing, was eighth.?Roman de Beer was ninth as he tests with Trident for the second winter in succession, ahead of another Carlin rookie Emil Bernstorff.

The GP3 cars return to the track later in the day following GP2’s opening session.