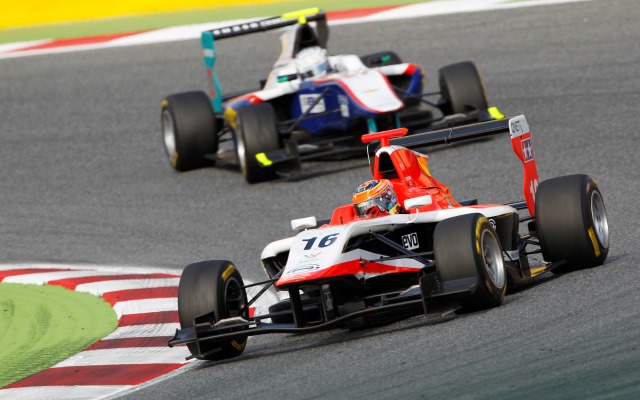 Dean Stoneman claimed the first victory of his return to single-seaters after a battle with Matheo Tuscher in a damp GP3 race two in Barcelona.

Tuscher made a good start from pole position to keep the lead at the start, but in the tough conditions he was caught and passed by Stoneman on lap two.

Tuscher fought back later in the race, but he was unable to find a way past Stoneman and had to settle for second to cap a promising return to action after sitting out most of 2013.

Dino Zamparelli was also involved on the tail of the win fight at one stage, but then began having to defend from Richie Stanaway. Zamparelli held on however to claim his maiden GP3 podium and complete a top three entirely made up of ex-FIA Formula Two drivers.

Stanaway had earlier come out on top of a fight with his fellow German F3 champions Marvin Kirchhofer and Jimmy Eriksson. The latter two swapped positions several times during the race, but it was Kirchhofer who eventually came out on top.

Jann Mardenborough held a fine seventh after charging from 14th in the early laps, but the GT Academy star then threw the position away when he spun at the chicane at a restart following a safety car caused by a spin for Denis Nagulin.

Patric Niederhauser initially inherited the position, but he was passed by Emil Bernstorff – who had come from 24th on the grid. Bernstorff was later passed by Nick Yelloly?to settle the final two points positions.

Race one winner Alex Lynn was forced wide on the first lap down to 15th and chose to gamble on a change of tyres to wets during the safety car but this did not work out and he finished 18th.