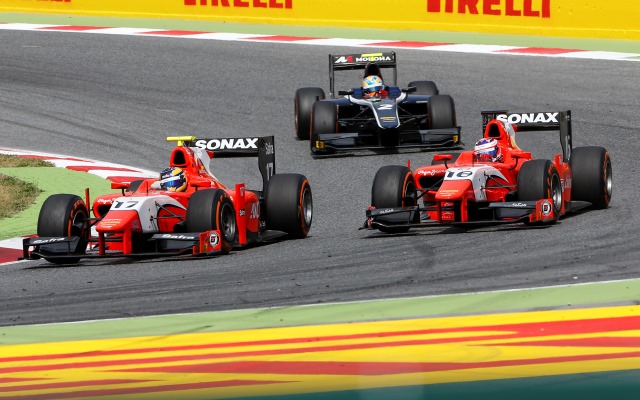 A penalty for Rene Binder after the GP2 feature race in Barcelona has handed the reverse grid pole position for Sunday’s sprint race to the Arden driver’s stand-in team-mate Tom Dillmann.

Binder had finished in seventh – his third points finish from three races – but was later penalised for not slowing down sufficiently under yellow flags.

20 seconds was therefore added to his time, dropping the Austrian to 15th in the race results. Dillmann, standing in for the injured Andre Negrao in the Arden car, was therefore promoted to eighth place. He will now start on pole for the sprint race, with impressive series debutant Tio Ellinas alongside.

Conor Daly was found guilty of the same offence as Binder, with his penalty dropping him one place from 17th to 18th.

Stefano Coletti was given a similar penalty for going off track under double yellows, and therefore “compromising the marshals’ safety”.? That dropped him from 12th to 16th. The Racing Engineering driver took to the run-off at turn ten on the first lap as he avoided the stranded cars of Raffaele Marciello and Daniel Abt, while recovering from a first-corner incident of his own.

One final penalty was handed out to Daniel De Jong after his team released his car without a wheel attached correctly, leading to his retirement on the following lap. He was handed a ten-place grid penalty, but as he had been due to start 21st of the 26 anyway, he will be made to start the sprint race from the pits.