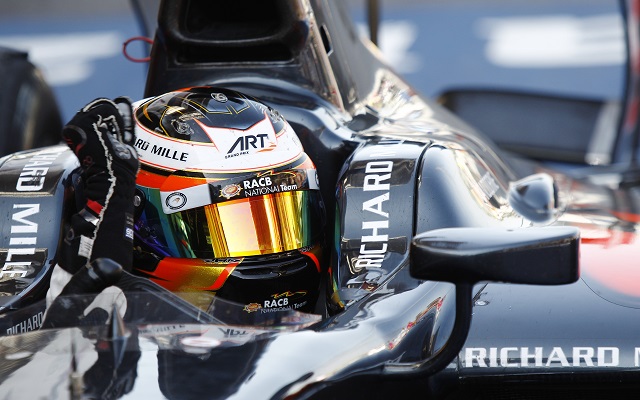 Stoffel Vandoorne continued his winning ways in the GP2 feature race in Barcelona, managing to stay out front despite a late attack from quicker cars on fresher tyres.

After making his pitstop early in the race, Vandoorne was chased down by the late-stopping Alexander Rossi in the closing laps, in a reverse of what happened in Bahrain when Vandoorne went on to take victory from behind.

Rossi had eliminated the majority of a six-second gap to Vandoorne in a matter of laps and had four remaining to make his move for the lead. However, the Belgian was able to respond immediately and start opening his lead back up again, eventually sealing victory by 1.9 seconds.

Rossi was passed for second place by Mitch Evans, who had led much of the race ahead of the American before the pair made their late visits to the pits.

Starting from his sixth consecutive GP2 pole position, Vandoorne was challenged into the first corner by a fast-starting Alex Lynn. Rather than diving down the inside, Lynn backed off but found himself passed around the outside by his DAMS team-mate Pierre Gasly.

All three started on the option tyre and therefore pitted early and let fourth-placed Evans into the lead. They rejoined the action behind a total of 12 drivers that were going long, and the job of passing the slowest of these was made more difficult by the non-functioning of DRS.

Vandoorne did manage to fight his way up into sixth place before the prime-starters pitted, handing him back the lead. That was threatened however by the DRS becoming available again at the end of the race, theoretically benefiting those who stopped later and were therefore quicker at the end of the race.

Having clung onto the back of Evans all through his first stint, Rossi pitted a lap earlier. He rejoined behind Vandoorne, Gasly and Lynn but was able to quickly overtake them, with Evans coming out behind him but quickly following suit as the DAMS duo fought between themselves.

Lynn’s attempts to get by Gasly led to him being passed by Rio Haryanto, another to have stopped early. The Bahrain sprint race winner went on to take fourth away from Gasly, with the Frenchman running deep at Turn 1 and also losing out to Lynn and Raffaele Marciello, who started on primes and spent much of the race third behind Evans and Lynn.

After jumping from 11th to sixth on the opening lap, Arthur Pic had fought with his Campos team-mate Haryanto for much of the race but floundered at the end and lost eighth place and reverse grid pole to the late-stopping Norman Nato.

Richie Stanaway, fifth for the middle part of the race behind Nato, claimed a first GP2 point for himself and the Status Grand Prix team.