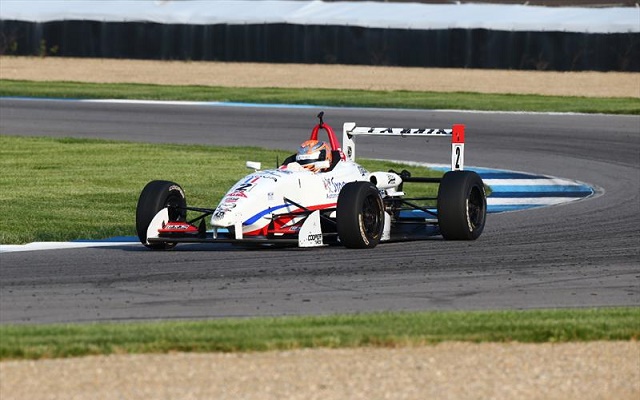 Cape Motorsports’ Nico Jamin?led from start to finish to win the second of two USF2000 National Championship races at Indianapolis Motor Speedway, finishing ahead of teammate?Aaron Telitz for the second straight day.

Eager to get to an early lead, Jamin jumped ahead at the first attempt at a rolling start, which was waived off. But a subsequent cleaner start still allowed Jamin to get an early advantage over Telitz and the field.

Meanwhile, championship frontrunner Jake Eidson lost his front wing shortly after the start, forcing him to pit for a replacement on lap three and leading to Eidson’s streak of seven consecutive podiums being snapped.

Eidson was not alone in misfortune.?Augie Lerch would spend two extended stays in pit lane for persistent gremlins, and?Team Pelfrey’s?Garth Rickards would retire after just seven laps with a mechanical failure.

Jamin, however, would continue to set fast laps around the 1:26.5 range, setting an overall fastest lap of 1:26.462 on lap 15, as he gradually opened up a lead over Telitz and left the remainder of the field behind.

The Frenchman completed the job with a margin of victory of 4.86 seconds over Telitz, to pick up his series-leading fourth win of the season. With Eidson fighting back late in the race just to finish 12th, Jamin will leave Indianapolis Motor Speedway with the championship lead.

Australian?Anthony Martin?finished third, picking up his second podium of the season, ahead of?Luke Gabin, who bagged his best finish to date in fourth, and?Yufeng Luo, recovering from Friday’s misfortunes in fifth.

Parker Thompson?finished sixth, ahead of?Nikita Lastochkin who spent most of the race battling with teammate?Ayla Agren – until the Norwegian suffered a flat tyre on the last lap. That promoted the debuting?Sam Chastain to eighth, with?Max Hanratty and?Keyvan Andres Soori completing the top ten.