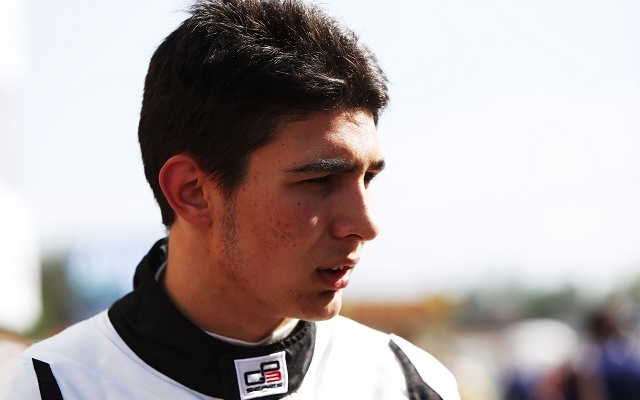 Esteban Ocon proved unstoppable in the opening race of the 2015 GP3 season at Catalunya, converting second place on the grid into a comfortable win.

Off the line, Ocon managed a sublime start and, with poleman Luca Ghiotto somewhat bogging d0wn, the ART Grand Prix driver was well in the clear in turn one.

His advantage over the rest would only increase over the next few corners, eventually rising to a massive 2.5s in just two laps.

Ghiotto could subsequently make up little ground under green flag conditions, but a comfortable cruise to victory for Ocon was interrupted by a safety car midway through the race.

Newcomers Ralph Boschung and Seb Morris had come together, their cars stranded on the side of the track and requiring a rather lengthy stoppage.

But Ocon’s lost lead was of little consequence as a superb restart by the reigning FIA F3 champion left Ghiotto with little chance to catch up.

With Ocon dominating out front, the Italian was set for a comfortable maiden podium in second, but came under pressure from Emil Bernstorff as he started to struggle with tyrewear.

But he held on, leaving Bernstorff to settle for a podium on his Arden debut.

Jann Mardenborough had restarted ninth but made five overtakes in the closing stages, weaving in and out around traffic with other drivers struggling with tyrewear.

He passed ART’s Alfonso Celis with two laps to go, the Mexican having run the whole race in fourth before his tyres dropped off at the end and sent him out of the points.

Another ART man Marvin Kirchhofer claimed fifth, ahead of Jimmy Eriksson and Kevin Ceccon, the duo having managed their tyres well and making up lots of ground in the end of the race.

Ferrari junior Antonio Fuoco, who had started 21st after taking to the gravel in qualifying, recovered to claim reverse-grid pole in eighth, with Status duo of Alex Fontana and Sandy Stuvik completing the top ten.

UPDATE: Sandy Stuvik was handed a ten-second penalty for overtaking under safety car and has relinquished in the final point in favor of Alfonso Celis.