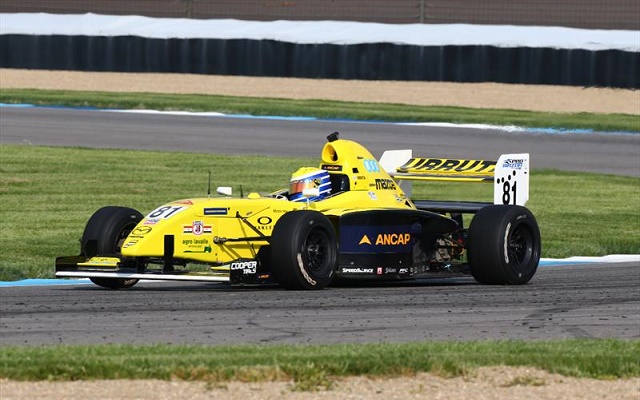 Santiago Urrutia?became the first Uruguayan driver to win at the Indianapolis Motor Speedway, with a wire-to-wire victory in the finale of a three-race weekend of the Pro Mazda Championship.

Urrutia led a train of Juncos Racing cars to the finish and extended his championship lead to twenty-five points over?Neil Alberico.

It was a clean getaway on the second attempt at a rolling start for all 21 drivers, with Urrutia getting ahead and?Will Owen slotting into second.

Further back,?Andretti Autosport driver and Thursday race winner?Weiron Tan was hit from behind and left stranded at turn eight, ending his race after just one lap.?Victor Franzoni also came in to pit twice before two laps had been completed, and lost a total of six laps in the final race of his Pro Mazda debut weekend. Finally, Expert Class driver?Carlos Conde?retired just three laps into the day?with mechanical failure.

Out front, Urrutia was able to maintain a lead over Owen, but was unable to stretch the lead beyond a margin of one second, as the American rookie kept in touch with the Team Pelfrey ace.

Behind them,?Timoth? Buret began to put the pressure on 16-year-old Pato O’Ward?for third, eventually taking the place on lap 15 when O’Ward drove too deep into turn 12. This also allowed Buret’s Juncos Racing teammate?Jose Gutierrez the chance to move into fourth, which he did nicely with a pass on O’Ward in turn 1 the next lap.

That meant that Juncos Racing were now running second, third, and fourth behind the leader Urrutia, who would not be denied his second victory of the season, leading all 21 laps on the way to the chequered flag.

Owen took second ahead of Buret, Gutierrez, and O’Ward – who held fifth despite final lap pressure from Florian Latorre, who started on the front row but fell to sixth on the opening lap, and Alberico.

Garett Grist was the last of the Juncos cars in eighth, finishing ahead of returning Pro Mazda race winner from last year,?Scott Hargrove, and tenth-placed?Daniel Burkett.?Kevin Davis placed sixteenth overall to take bragging rights in the Expert Class.