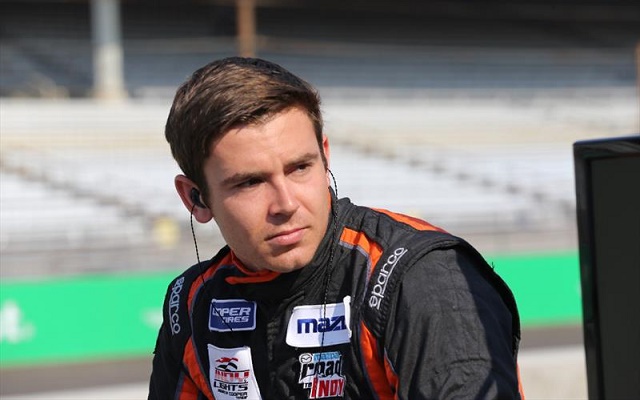 Rayhall, taking part in his second Lights round with 8 Star, became the first driver to win for the team in open-wheel racing, delighting team owner Enzo Potolicchio.

On the front row alongside Ed Jones, Rayhall nailed the start and was into the lead in turn one.

SPM’s Jack Harvey tried to pass Jones as well and was forced off-track, spinning the Emirati around as he returned to the asphalt.

Jones was relegated to the back but gained position when Spencer Pigot and Ethan Ringel came to blows into turn one a few laps later, with Pigot’s race ending in the gravel and bringing out the caution.

At the restart, Harvey tried to work his way around Rayhall, but found no way through and was also passed by Belardi’s Felix Serralles.

Rayhall then built up a gap of 1.5s over the Puerto Rican and soon Harvey struck back with a forceful move on Serralles into turn one.

The Belardi driver was also passed by RC Enerson and then spun out trying to get the spot back.

The fighting behind him allowed the race leader to stretch his advantage to 2.8s, but Harvey began to make quick work of the gap, lowering it to a second with seven laps to go.

Rayhall, however, kept steady and made no mistakes on his way to the checkered flag. Harvey was set to take second, but his car slowed dramatically in the final few corners and he crossed the line in just fifth.

It was Enerson in second instead, claiming his best finish in Lights so far, with Max Chilton completing the podium and Jones recovering to fourth.

Kyle Kaiser finished sixth ahead of Juan Piedrahita, Shelby Blackstock, Scott Anderson and Ringel, while a bad race for Serralles took a turn for the worse when his car gave up on him with several laps to go.