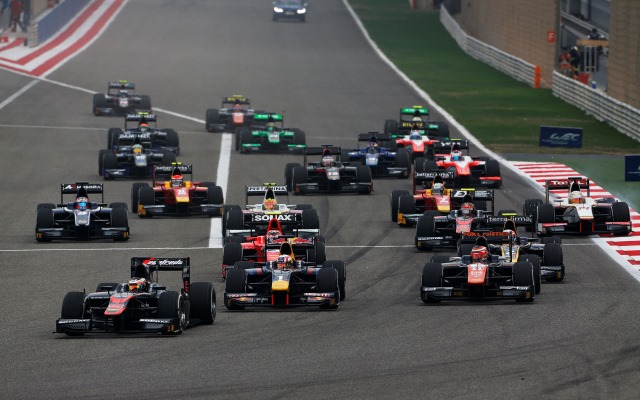 GP2 champion Stoffel Vandoorne claimed his third victory in a Bahrain feature race from as many attempts, winning in dominant fashion at the penultimate round of the season.

Vandoorne beat polesitter Pierre Gasly off the line and into Turn 1 and was never headed, even rejoining from his mandatory pitstop in the lead.

After Raffaele Marciello passed Gasly for second, Vandoorne maintained a two-second lead for a large part of the race before pulling away as others struggled with tyre wear.

Rejoining in clean air then helped him to quickly open his advantage up to 13 seconds as others scrapped behind, repeating his Bahrain wins from his 2014 series debut and the opening race of his title-winning campaign.

Nobuharu Matsushita came from eighth on the grid to finish second in an ART one-two which sealed the squad the teams’ championship with three races to go – just it had done in the earlier GP3 race.

The Japanese driver worked his way up to third behind Marciello before pitting and rejoined in what would be a net fourth once the early-stopping Nathanael Berthon faded after climbing to second.

He gained a place when Alexander Rossi ran into the back of Mitch Evans at Turn 4 and broke his front wing, necessitating an extra pitstop.

Matsushita then closed on Evans and passed him on DRS down the pit-straight.

In probably his best performance of the season, Marciello pitted on the same lap as Vandoorne but that was too late for the Italian and he rejoined way down before recovering to fourth with a good move around the outside of Sergey Sirotkin at Turn 4. That improved by two places on Marciello’s previous best feature race finish this year.

Gasly faded as the first stint went on and finished sixth ahead of Rio Haryanto, who survived an incident in which he forced Jordan King towards the pit entry when he wanted to stop, with the Briton then dodging between Haryanto and the pit wall to carry on his way.

King finished ninth on the tail of fellow Briton Alex Lynn, who like DAMS team-mate Gasly went backwards in the first part of the race but did claim reverse-grid pole for race two.

Arthur Pic took 10th after getting ahead of the struggling Berthon.

Berthon didn’t struggle as much though as two other drivers to make early pitstops – British FR3.5 converts Dean Stoneman and Oliver Rowland.

The duo, in their second appearance with Carlin and first with Status respectively, would have hoped to have gone forwards after poor Thursdays but could not make their tyres last and wound up 21st and 22nd as the final drivers on the lead lap – behind even the double-stopping Rossi.

Norman Nato?was third early on and was still on course for a top-eight finish when he picked up a rear-right puncture, potentially on debris from the Evans-Rossi clash.