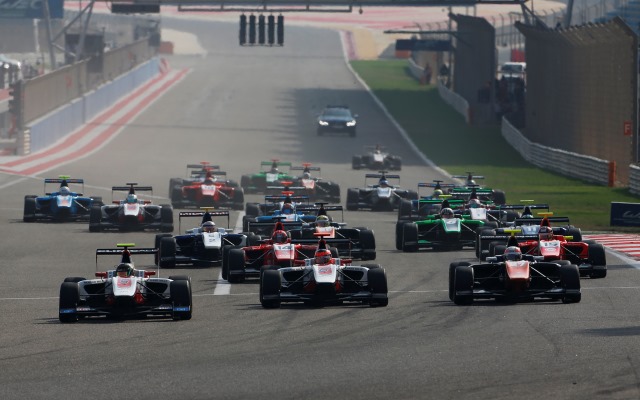 A fast start propelled Marvin Kirchhofer to victory in the first GP3 race in Bahrain as team-mate Esteban Ocon‘s streak of second-place finishes was finally ended on the very last lap.

The Frenchman did however finish ahead of his chief title rival Luca Ghiotto, who uncharacteristically faded to fourth, to now lead the championship by three points.

Ocon started from pole and immediately covered off his fellow front-row starter Ghiotto but his ART team-mate Kirchhofer made a lightning getaway from fifth and was able to snatch the lead, even using the pitlane to get around Ocon.

With Ocon second and Ghiotto third, the top three were closely matched for much of the race and as tyre wear became an increasing factor, Emil Bernstorff also closed in and the lead quartet was split by just two seconds with four laps to run.

Unusually, Ghiotto struggled for pace from his Trident entry as the race wore on and couldn’t defend from Bernstorff.

The top three were each separated by just half a second with two laps to go, and on the last lap Bernstorff got a run on Ocon out of Turn 3.

Ocon defended the inside and as Bernstorff attempted to go around the outside of Turn 4, the pair banged wheels and Ocon stayed ahead.

Bernstorff wasn’t finished though and pulled past on the way into Turn 9, denying Ocon a 10th consecutive second-place finish.

The battle behind allowed Kirchhofer to cruise to a 1.5-second victory, a Ghiotto-equalling fourth of the campaign.

Ghiotto finished up 5.6 seconds back in fourth, but setting the fastest lap early in the race means he only loses one further point to Ocon after conceding the advantage in qualifying.

Kirchhofer and Bernstorff have made up ground and are now 44 and 49 points behind respectively, while the season-long performances of Ocon and Kirchhofer have helped ART to regain the teams’ title with three races to go, its fifth crown in the six years of GP3.

While the championship’s top four were in a class of their own, Jimmy Eriksson was true to his points position of fifth while Artur Janosz was sixth, one place short of his best-yet finish from the previous race in Sochi.

Jann Mardenborough won out in a race-long battle with Alfonso Celis to finish close behind Janosz in seventh, while his Carlin team-mate Antonio Fuoco charged to ninth late on ahead of?Ralph Boschung after dropping back at the start.

It was a bad race for the two drivers who should have shared the second row.?Kevin Ceccon faded from third to 14th, while Alex Palou‘s continued misfortune forced him into the pits before the race had even started.

Matevos Isaakyan charged to 10th in the early laps of his first GP3 race after a qualifying incident left him starting 21st, but he appeared to quickly use up his tyres, ended up back in 21st by lap 12 and retired to the Koiranen pits seven laps short of the distance.