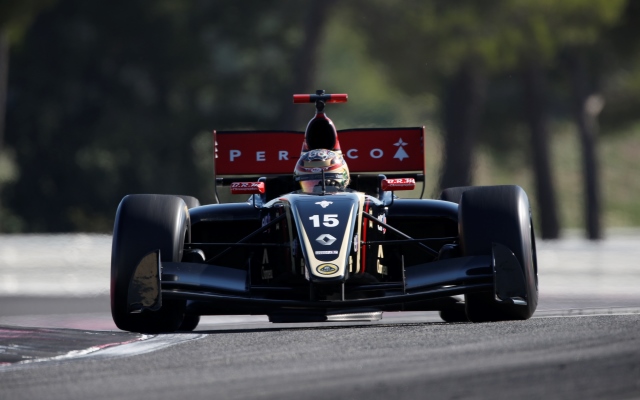 Marlon Stockinger remained the fastest Formula Renault 3.5 driver in the Friday running at Paul Ricard by topping the afternoon session.

The Filipino spent time on top of the pack in the middle of the session and then returned to first after the chequered flag, displacing Matias Laine by 0.096 seconds.

Stockinger’s fellow Southeast Asian driver Jazeman Jaafar was a frontrunner for much of the session, though was shuffled down from first to third at the end.

After his third place in the morning, Oliver Rowland took fourth in the afternoon ahead of the French duo of Norman Nato and Matthieu Vaxiviere, Stockinger’s team-mate at the Lotus-branded Charouz team.

Without points since round four at Spa, Luca Ghiotto enjoyed a strong run to seventh place, one spot ahead of title contender Roberto Merhi, who completed a top eight that was separated by just 0.353 seconds.

Completing the top ten were Oscar Tunjo and Sergey Sirotkin. Championship leader Carlos Sainz was 12th, and fellow Red Bull Junior Pierre Gasly back in 16th on his home ground – two spots ahead of fellow Frenchman Esteban Ocon who is in his second event in the series with Comtec.