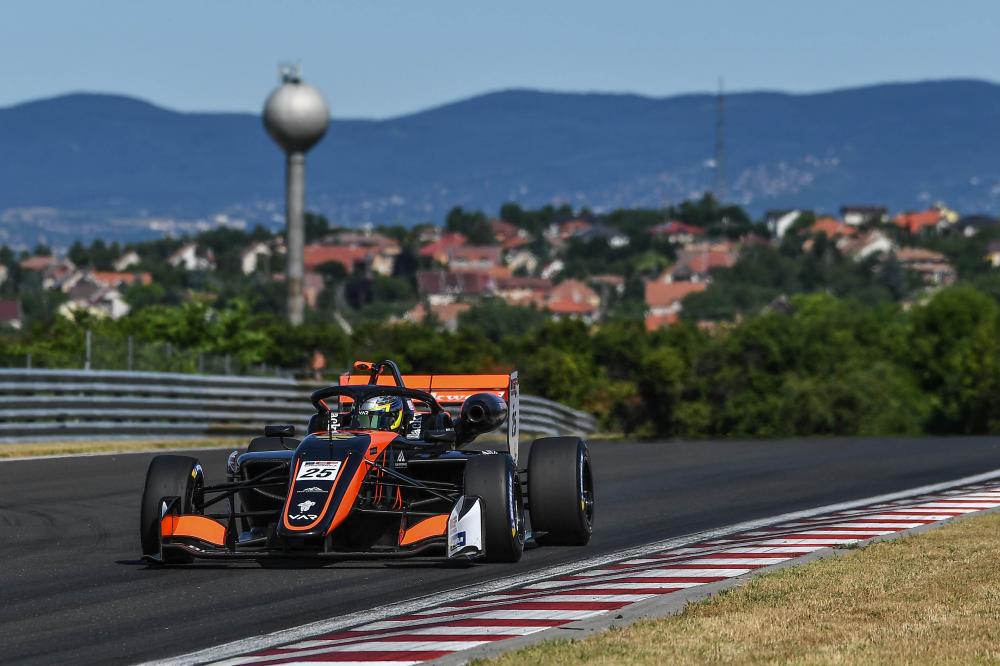 Van Amersfoort Racing made it two Euroformula wins in a row as Casper Stevenson picked up victory at the Hungaroring.

The Briton made a strong start from second on the grid, while CryptoTower Racing Team’s Nazim Azman struggled with the second part of his launch from reversed grid pole, and tucked down the inside on the run to the first corner.

Drivex School’s Joshua Duerksen also made a rapid getaway and tried going down the inside of Stevenson, but the Briton held firm and moved into the lead while Azman and Duerksen battled through the first few corners over second place.

The result of that battle was that Stevenson ended the opening lap with 2.2 seconds in hand over Azman, and it was a gap he would gradually extend over the first half of the race.

Azman initially was holding up a train of cars, but he then started to pull away and starting taking time back out of Stevenson. This prompted a response from the leader, with the gap ebbing and flowing through the remaining laps but never going down far enough for Stevenson to be in sight of Azman.

Following its first ever win on Saturday with Cem Bolukbasi, Stevenson’s victory marked two in a row for VAR.

Bolukbasi finished the race in third after also making a strong start, holding off CryptoTower’s Louis Foster for the distance.

Duerksen faded to fifth, and had Motopark’s Jak Crawford on his tail for the majority of the race. A lock-up on lap 13 of 18 brought the Red Bull junior right onto his gearbox, but it was then announced that Crawford had a five-second penalty for repeated track limits violations and meant that even if he made a pass he would be unlikely to make a gap in time to gain a position.

Double R Racing duo Joshua Mason and Zdenek Chovanec also picked up 5s penalties for jumping the start, which didn’t impact Mason’s finishing position of seventh but but did drop Chovanec from ninth to 11th.

While Crawford earned two points for gaining the most positions from the back of the grid, his team-mate Das spent most of the race in last place and instead went for fastest lap to get himself pole for race three. He did pass a few cars late on though and was classified 10th.

VAR’s Rafael Villagomez finished several laps down after early contact broke a trackrod. He returned to his garage before emerging to try rivalling Das for fastest lap.