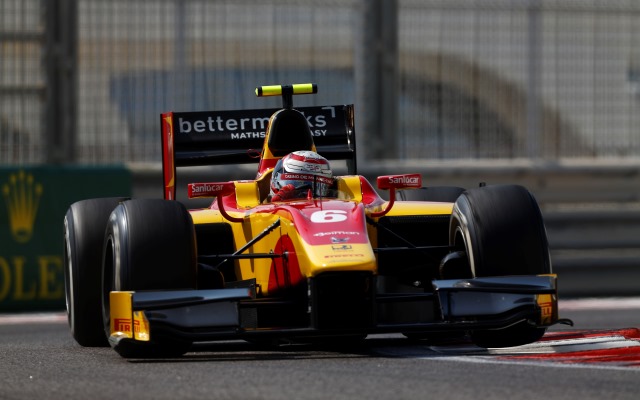 From second on the grid, the Monegasque driver swooped around the outside of pole-sitter Arthur Pic at the first corner. He ran quite wide onto the run-off, but emerged in the lead and the manoeuvre didn’t attract the stewards’ attention.

From there he pulled away, winning by 3.7s as he collected his seventh win in the series.

Felipe Nasr enjoyed a strong first lap from fifth of the grid, taking second place away from Pic. He held that position until the end of his final race before making his Formula 1 debut for Sauber next March. Pic took his third podium of the campaign.

The race was processional for the most part, but livened up in the closing stages as fourth-placed Johnny Cecotto lost pace and was swamped by those behind him. Stephane Richelmi and Mitch Evans went either side of him under braking for turn 11, only to both run deep and miss the corner.

Evans gave up position to Cecotto, while Richelmi continued ahead and finished fourth, but is under investigation for not respecting track limits. Evans passed Cecotto cleanly one lap later.

Stoffel Vandoorne was aiming to hold on to the runner-up spot in the championship that he had claimed by winning the feature race away from Nasr, but Nasr’s second place would have given him the position by one point while Vandoorne was running seventh.

However, the Belgian worked throughout the race to secure the two bonus points for fastest lap, and then made sure of P2 by taking sixth place in the race away from Cecotto.

Cecotto held onto seventh ahead of Raffaele Marciello, with Sergio Canamasas and Takuya Izawa completing the top ten.

Jolyon Palmer‘s championship-winning season ended with his first non-finish of the year, when he spun on the opening lap while dicing with Evans and stalled.

Update: Richelmi was indeed penalised for exceeding track limits, with and extra 20 seconds dropping him out of the points to ninth.