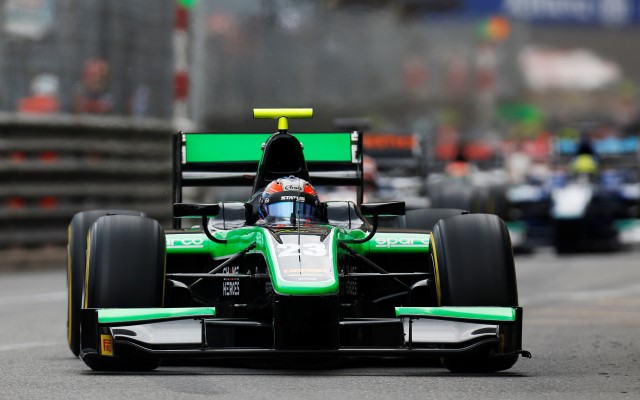 Richie Stanaway claimed his first GP2 victory in the Monaco sprint race with an assured drive.

Starting second on the grid, the rookie moved into the lead with a better launch than pole-sitter Raffaele Marciello.

After an early virtual safety car period to allow for two separate incidents on the opening lap to be cleared, Stanaway was never troubled and had moved four seconds clear of Marciello after 20 of 30 laps.

From there the Kiwi cruised to the finish – although he came perilously close to smacking the barrier at the final corner of the race – and delivered a first win for himself and the Status Grand Prix team on just their third weekend in the series.

Marciello, who had topped his qualifying group on Friday and taken an early lead in the feature race with a good start, had to settle for a first podium of the season in second, just a second ahead of another rookie Sergey Sirotkin.

Sergio Canamasas put in a repeat of his overtaking move at Sainte Devote from yesterday to pass Julian Leal and back up his third place on Friday with a fourth on Saturday.

Arthur Pic was sixth ahead of Alexander Rossi and Stoffel Vandoorne. The gap between the latter two see-sawed as they attempted to take the fastest lap, with Vandoorne managing to better Stanaway’s early benchmark to claim two bonus points and thus extend his championship lead over Rossi by one point, to 44.

There was some late race drama at the foot of the top 10 when Jordan King took off over the back of Pierre Gasly at the chicane as he attempted to go down a gap on the outside under braking, only for Gasly to try to cover again.

While King was forced to retire on the spot, Gasly held onto 10th behind Nick Yelloly despite taking a big hit to his rear-right tyre.

Rio Haryanto was eliminated at the hairpin on the first lap after being sandwiched between Norman Nato and Rene Binder, causing him to ride over his own front wing.

Zoel Amberg and Johnny Cecotto also failed to complete the first lap after contact but Amberg in the barriers climbing the hill to Massenet.

Mitch Evans failed to make the start after his car stopped on his way to grid for the second successive sprint race, in a repeat of the issues that also affected him in practice on Thursday.