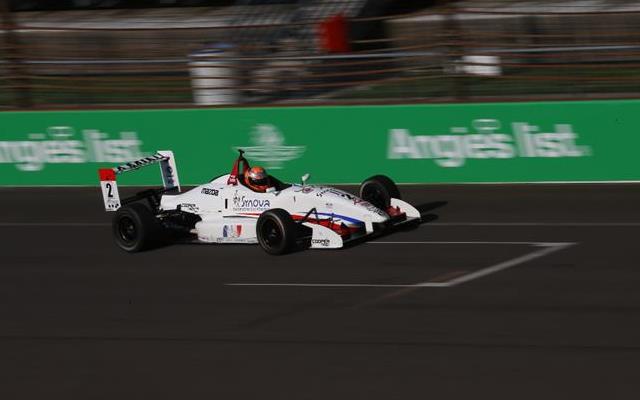 Nico Jamin will start from pole position for the fourth consecutive race?after setting the fastest time ahead of the USF2000 National Championship’s Freedom 75 at Lucas Oil Raceway.

The fastest lap?set by the newest member of the All Road Academy and USF2000 championship leader was turned at 21.5512 seconds, with a two-lap average speed of 104.350 miles per hour.

Jamin will share the front row with Jake Eidson, who now sits in second in the championship following a DNF at Indianapolis Motor Speedway – the Pabst Racing driver was slower by only one-tenth of a second.

Jamin’s Cape Motorsports teammate and defending race winner?Aaron Telitz qualified third with a lap at 21.706 seconds, next to the second Pabst car of?Yufeng Luo, the fastest oval rookie in the field.?Anthony Martin, who set the early benchmark in qualifying as the first driver out, will line up next to?Keyvan Andres Soori, driving for ArmsUp Motorsports, last year’s winning team.

Canadian?Parker Thompson, fifth in the standings behind Martin,?will line up next to?Garth Rickards on the fourth row, and the fifth row will consist of?Max Hanratty and Norwegian?Ayla Agren for the 75-lap race.