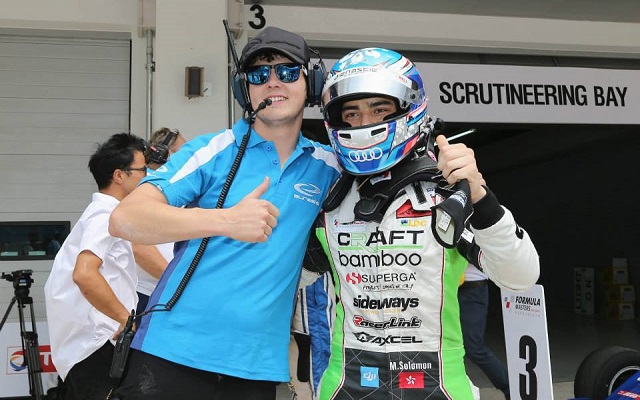 Solomon started on the front row alongside Munro, who held pole after posting the fastest lap in race one. The Hong Kong-based driver managed to get a strong start, vaulting into the lead at the first corner.

Munro followed Solomon closely for most of the race, but was unable to find a way through and had to settle for second.

Munro’s teammate Dan Wells finished in third place. Akhil Rabindra ran fourth for most of the race, before spinning off into retirement at turn eight.

This promoted Ronald Wu to a strong fourth place, his best finish of the season, just ahead of Darma Hutomo, with Andersen Martono finishing sixth for Meritus.

Yuan Bo and Matthew Swanepoel, who tangled in the first race, started race two in 14th and 15th places. Both drivers managed to make up positions in race two, with the Chinese driver finishing in seventh, while the South African came home ninth. The two drivers were split by Senna Iriawan in eighth, with Bao Jin Long completing the top ten.

Sato in control in Auto GP qualifying at Spielberg