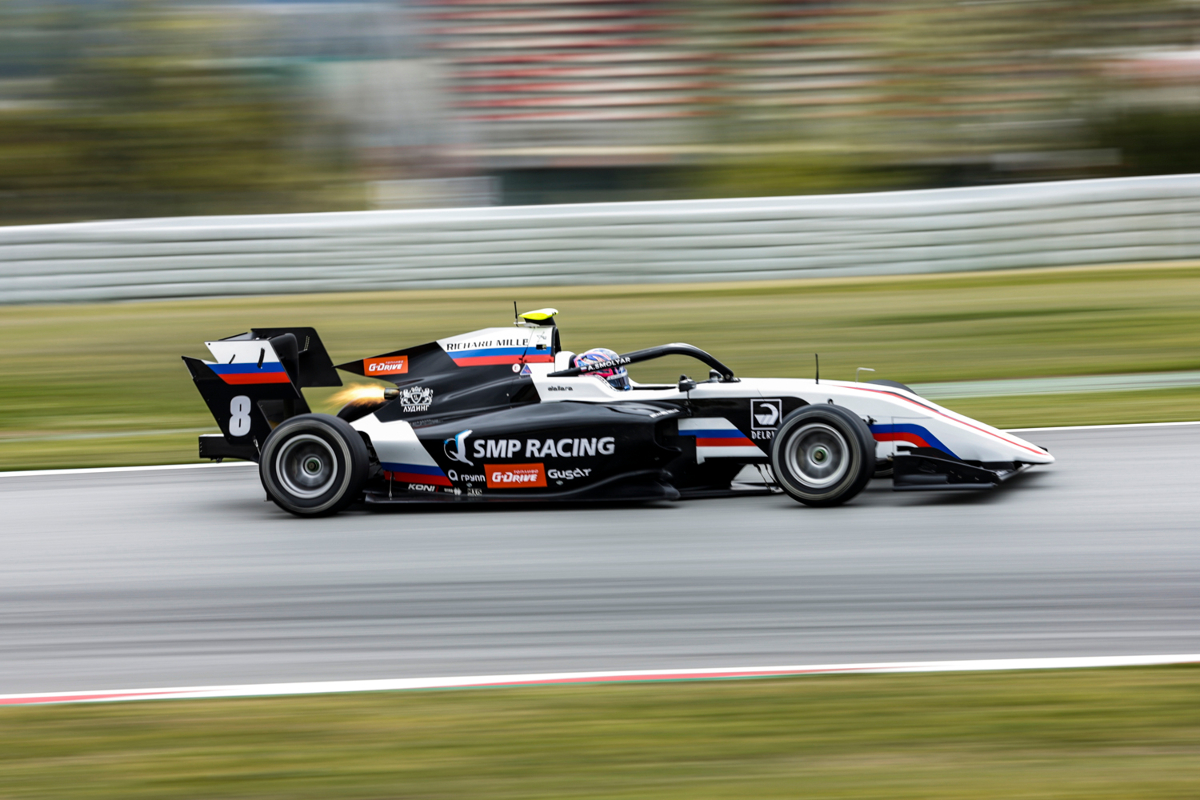 Alexander Smolyar won the opening FIA Formula 3 Championship race of the season in Barcelona – the first under the category’s new three-race format.

The ART Grand Prix driver was coming under pressure from Clement Novalak in the final laps of the race, but a late safety car denied Novalak the chance to go for the race win.

With the top 12 from qualifying reversed to form the race one grid, Smolyar started from second alongside polesitter Johnny Edgar but immediately came under pressure from Caio Collet. He managed to shake the MP Motorsport driver, who was then drawn into a battle with Novalak and Logan Sargeant, and closed the gap to Edgar.

As soon as DRS was enabled, Smolyar was on the attack, sweeping past the Red Bull-backed Carlin driver to take the race lead. Edgar tried to fight back a lap later and the two came close to touching when Edgar locked up while trying to make a move, but he couldn’t get back through. Smolyar managed to break the tow to Edgar and extended a gap at the front of the field.

Edgar was soon joined by Collet, who had put up a good defence early in the race to maintain third position. Collet tried to challenge Edgar for second, but a wide moment allowed Trident driver Novalak to sweep through to take third.

Novalak soon snatched second from Edgar around the outside of the first corner and was closing the gap to Smolyar when the safety car was brought out with two laps remaining, after Oliver Rasmussen clipped the curb and ran into the gravel at high speed at the final corner. The HWA driver hit the barriers and was unable to get going again.

With the race having already been cut short by a lap after Ido Cohen stopped on the formation lap, Rasmussen’s car couldn’t be cleared in time for a restart and the race ended behind the safety car, allowing Smolyar to maintain take his maiden F3 win.

Collet held off a charging Logan Sargeant to take third, with the Charouz driver immediately improving upon the team’s previous best F3 finish of seventh.

Sargeant’s team-mate Enzo Fittipaldi also had a strong race. He started P18, but climbed up through the order to take P12, earning pole position for the second race of the weekend. David Schumacher will start alongside him.

Edgar dropped back to fifth, finishing ahead of the battling Olli Caldwell, Frederick Vesti and Dennis Hauger, with Victor Marins and Matteo Nannini completing the top 10.