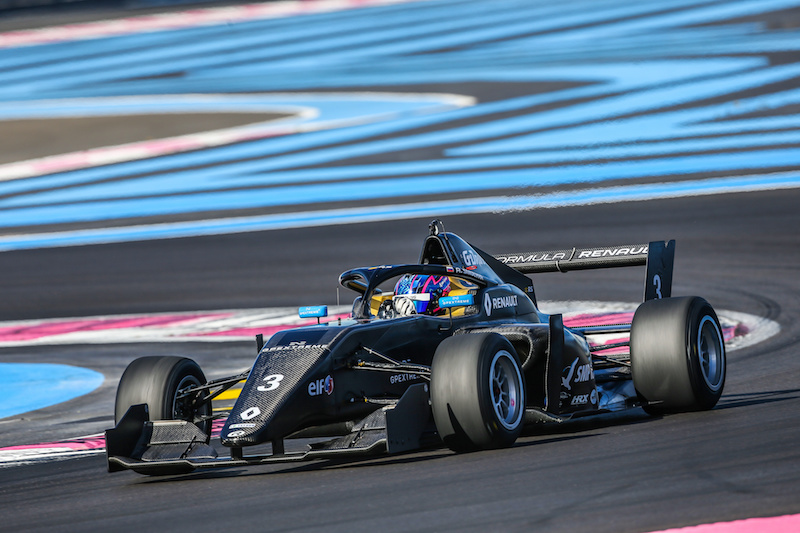 Alexander Smolyar posted the fastest time at the end of the first day of the Formula Renault Eurocup pre-season test at Paul Ricard, after R-ace GP team-mate Oscar Piastri had topped the earlier three sessions.

With less than 15 minutes to go in the last of four roughly one-hour segments, Smolyar became the first and only driver to dip below the two-minute mark with his lap of 1m59.786s.

In that final session, Smolyar was 0.34 seconds faster than Piastri, whose best time of the day had been a 2m00.013s set shortly before lunch.

Ugo de Wilde (JD Motorsport) had been second fastest in the opening session, and spent a short period of time on top in the final half an hour before ending up third – both in the final session and overall.

Fourth went to Renault junior Victor Martins of MP Motorsport, the closest man to Piastri in the second and third sessions having only been knocked off top spot by the Australian late on.

Smolyar ran a limited a number of laps over the day compared to his rivals, and missed the first session altogether.

Sebastien Fernandez was fifth in the final session and overall for Arden, ahead of the third R-ace GP driver Caio Collet, the last driver below the 2m01s mark.

Petr Ptacek was seventh ahead of his 2018 Italian Formula 4 team-mate Leonardo Lorandi, who had his first run since signing with JD Motorsport. Lorenzo Colombo was ninth, while Federico Malvestiti and Esteban Muth were equal 10th fastest, setting the same time in the final session.

Twenty-one cars are taking part in the test, four more than at Magny-Cours last week, with Lorandi driving a third JD car alongside de Wilde and Joao Vieira.

FA Racing by Drivex has got a second car out for Brad Benavides alongside its other signing Patrick Schott, while Global Racing Service has joined the fray with its confirmed signing Xavier Lloveras as well as Campos FIA Formula 3 hire Alessio Deledda.