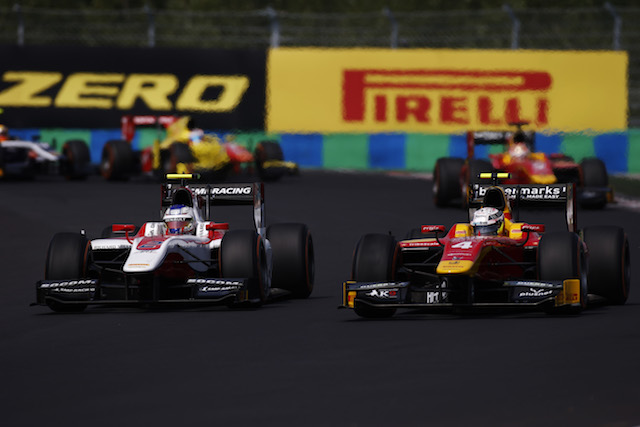 Sergey Sirotkin scored a long-awaited?first victory for ART Grand Prix with a great start and an epic pass on?Jordan King?in the GP2 sprint race at the Hungaroring .

The Russian went from sixth to second by the first corner, diving down the inside and benefitting from contact to his left to seal the move.

The safety car was required when?Arthur Pic ran wide at Turn 2 and spun in front of the pack, causing a pile-up that also eliminated?Nobuharu Matsushita,?Alex Lynn and?Luca Ghiotto.

For the third straight sprint race, King had started from pole and retaining the lead at the start put him on course for a third win but he messed up at the restart, running wide and off track at the penultimate corner.

Sirotkin got up the inside and although he?made the decision not to pass prior to the safety car line, he did get a good run on King along the pit straight.

King defended the inside at Turn 1 but allowed Sirotkin to get alongside him again out of Turn 2.

Sirotkin swept around the outside of King at Turn 3 and then completed the move on the inside at Turn 4.

From there, he pulled away, finishing up almost five seconds?clear.

King was joined on the podium by his Racing Engineering team-mate?Norman Nato, who also started on the front row but was pushed wide at the first corner when?Antonio Giovinazzi got into Matsushita behind him.

With Giovinazzi pitting at the restart with front wing damage,?Artem Markelov came through to fourth from ninth on the grid.?Mitch Evans and?Oliver Rowland also gained five places each to complete the top six.

Feature race winner?Pierre Gasly?couldn’t make so much progress, gaining just the one spot to finish seventh, but he extends his points lead after team-mate Giovinazzi’s fall.