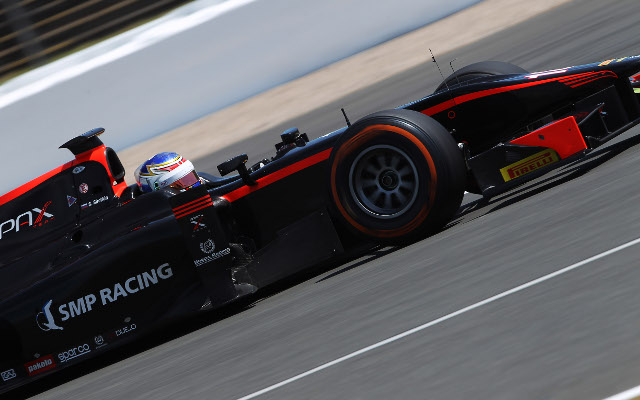 Sergey Sirotkin triumphed in a battle with GP2 championship leader Stoffel Vandoorne in qualifying at Silverstone to claim pole position for the first time.

Off the back of podiums in Monaco and at Spielberg, the Russian rookie rivalled the McLaren protege from the off.

Vandoorne set the early pace but was less than a tenth clear of Sirotkin, and when the Belgian ace found a quarter of a second on his next flying lap, Sirotkin made a similar improvement too.

The pair therefore led the way at the halfway point, four tenths clear of the impressive Oliver Rowland in his first day in a GP2 car.

Later in the session, Vandoorne’s attempts at improving his benchmark were hampered by a slide off track at the Vale chicane at the end of the lap, freeing up Sirotkin to move ahead by 0.150 seconds.

The Rapax driver then found another 35 thousandths after the chequered flag to secure his maiden pole and ensure that Vandoorne was denied top spot in GP2 qualifying for just the second time since Spa last August.

Monaco sprint race winner Richie Stanaway languished down in the bottom half of the times until leaping up to third place at the very end of the session, 0.429 seconds off Sirotkin.

That relegated Vandoorne’s nearest championship rival Alexander Rossi to fourth place ahead of Arthur Pic, whose change of chassis prior to Silverstone yielded fifth.

Alex Lynn sat fourth at the halfway point but was relegated to 12th behind fellow Briton Nick Yelloly, who put his frustration at being baulked into Copse by Robert Visoiu behind him to climb up from 19th at the very end.

Practice pace-setter and Spielberg sprint race victor Rio Haryanto spent the early part of the session in the pits with the engine cover off his car but made the most of a quiet spell in the middle of the session to climb to sixth, only to then drop to 15th late on.

Jon Lancaster sat out the session on his return to Hilmer due to an engine change.