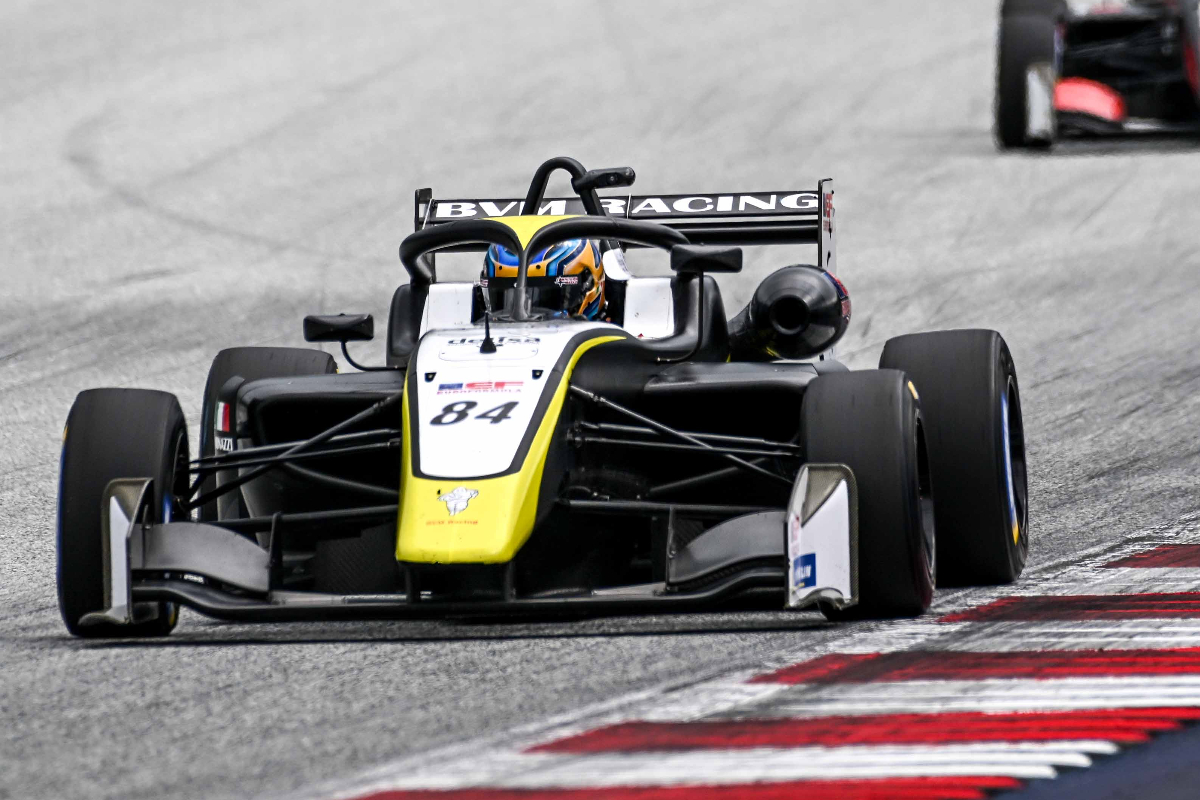 Francesco Simonazzi delivered BVM Racing its first Euroformula win in a crazy end to the final race of the weekend at the Red Bull Ring.

Simonazzi started from reversed grid pole, but was passed by Motopark’s Frederick Lubin into Turn 1 and then by Vlad Lomko, driving for Motopark’s Japanese offshoot CryptoTower Racing Team, at Turn 3.

Lomko tried to pass Lubin at Turn 4 but couldn’t do it, and then spent almost the rest of the race filling his mirrors.

Sitting just behind the lead trio was Motopark’s points leader Oliver Goethe, who had squabbled in the early laps with title rival Christian Mansell, but in the final third of the 21-lap race he started to drop back and wait for the fight ahead to explode.

It did just that on the final lap as long-time leader Lubin struggled for traction at Turn 3 just as Lomko was sticking his nose in. The result was his front wing bounced off Lubin’s rear-right tyre as he cut back across in defence at the exit of the corner, and as Lomko then moved left to go for the outside line for Turn 4, Lubin tried moving right to defend from Simonazzi.

Both got past entering the corner but Lubin locked up and ran deep to stay ahead of Simonazzi. That only lasted until Turn 6, where Simonazzi and Goethe cleared the ailing Lubin who would spin a corner later as his rear-tyre deflated.

Although the contact was caused by Lubin bogging down on exit rather than Lomko being too aggressive in attack, the latter was handed a five-second penalty as he met the chequered flag as the on-the-road winner.

The penalty dropped him to third behind Simonazzi and Goethe, while Lubin nursed his car home in seventh and was passed by Mansell, Josh Mason and Ayrton Simmons.

Simonazzi was not initially aware he had won once he reached parc ferme, and it was not only the rookie’s first win but also BVM’s first on its 97th race in the series. The Italian team debuted in 2013 and had a best finish of fourth, then picked up four podiums across two part-time campaigns the next seasons. It went full-time again in 2016 and ’17 but the results worsened, and it returned to Euroformula at the end of 2021 with Simonazzi before embarking on the full 2022 season.

Only weekend debutant Daniel Nogales finished behind Lubin, and Motopark’s Alex Garcia retired due to car troubles once again.