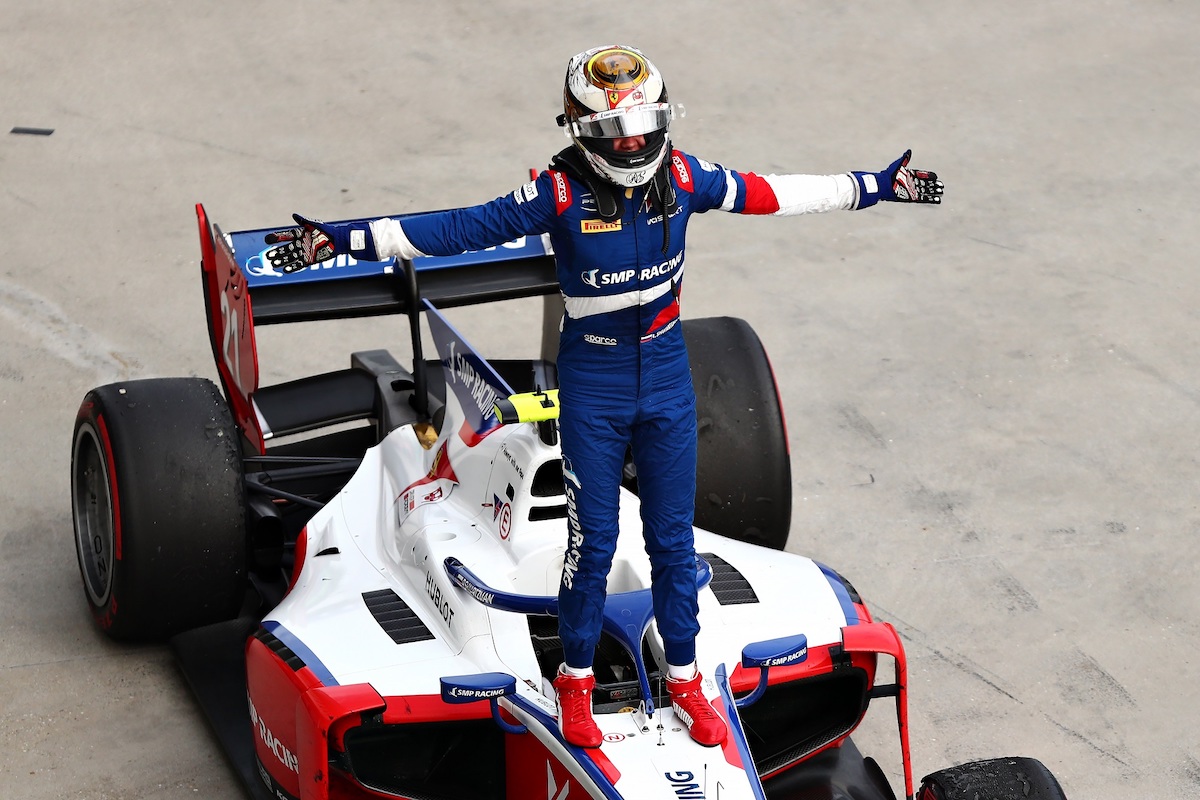 After qualifying back in 11th place, Shwartzman was the first of the drivers to start on the medium tyres rather than the softs.

Despite that, the Formula 3 champion made a superb start to get up to sixth place, as pole-sitter Callum Ilott fended off a fast-starting Dan Ticktum at Turn 2.

But the key to Shwartzman’s win was the difficulties that most drivers had after switching from the softs to the mediums – with teams lacking data after Friday’s rain-affected running.

Shwartzman himself complained of degradation as he stayed out on his mediums, but he managed to remain around 26 seconds in front of those that had already pitted.

The Prema driver made his stop for soft tyres with 10 laps to go and emerged in third place on the tail of fellow Ferrari juniors Mick Schumacher and Ilott, although a huge lock-up on his cold soft tyres into Turn 1 helped Luca Ghiotto to get past.

On the following lap, Shwartzman re-passed Ghiotto into Turn 12 and then swept past Ilott coming out of the final corner.

Within one more lap, he cut the four-second gap to team-mate Schumacher and breezed past him down the pit straight. He pulled away to win by 15.5 seconds and increase his championship lead.

Nikita Mazepin made it an unlikely Russian one-two from 16th on the grid after employing a similar strategy to Shwartzman, pitting one lap later.

He took third from his Hitech team-mate Luca Ghiotto with two laps to go and claimed second from Schumacher on the run to Turn 4 on the penultimate tour, securing his and his team’s first F2 podium.

Third for Schumacher is still his first feature race podium, and came after he moved from fifth to third at the start.

There were two safety car periods in the early laps, and Ticktum chose to pit immediately at the second restart at the end of lap six, with Ilott stopping a lap later and staying ahead of his fellow Briton.

Schumacher on the other hand stayed out until the end of lap 12 and briefly rejoined ahead of Ilott, who then went around his outside at Turn 2. After Ilott made a gap, Schumacher reeled him in again and got past on lap 18.

Ghiotto had made a slow start from the front row to fall to fifth behind Christian Lundgaard, but re-passed the ART driver on the first restart only to cut across in defence on the run to Turn 4, dislodging the front wing and puncturing the front-left tyre of Lundgaard’s car. Lundgaard labelled Ghiotto’s driving as ‘dangerous’ but stewards took no further action.

It was a torrid lap for ART, with Marcus Armstrong running slowly and off-line after first-lap front-wing damage when he tried to get past his ailing team-mate and sent Artem Markelov off into the Turn 5 barriers, causing the second safety car. Both ART cars later retired after pitting – in Lundgaard’s case due to a seemingly unrelated gearbox issue.

After passing Ilott, Ghiotto ultimately finished fourth ahead of two more drivers on the alternative strategy, with Felipe Drugovich grabbing fifth from Jehan Daruvala on the last lap.

Ilott slumped to eighth place, as Louis Deletraz made his mediums last better to beat him to seventh. Ticktum fell back much earlier but ended up just 0.8s behind Ilott and back ahead of Guanyu Zhou.

A star one week ago in Austria, Yuki Tsunoda was a lapped 16th after damaging his front wing in contact with compatriot Nobuharu Matsushita.

Roy Nissany caused the first safety car when he outbraked himself and slammed into Trident team-mate Marino Sato at the start of lap two, eliminating both from the race.