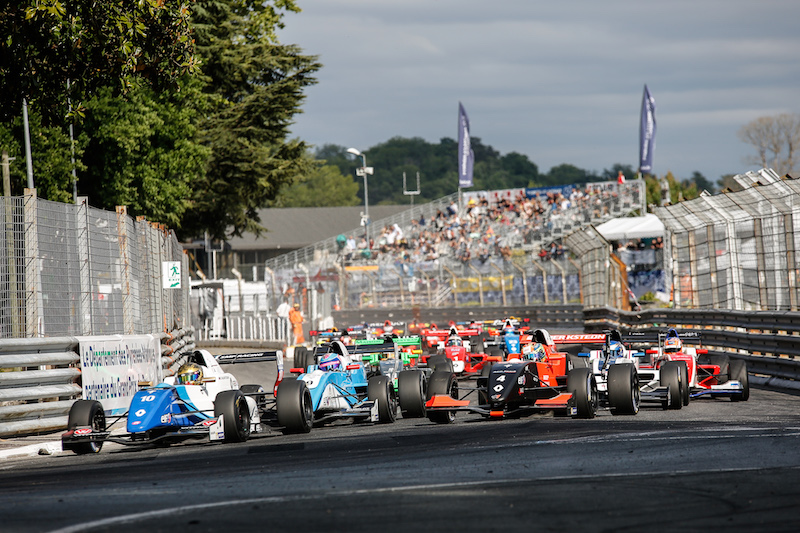 Robert Shwartzman converted pole into his third win of the Formula Renault Eurocup season in race one at Pau to close to within two points of the championship lead.

Shwartzman was pursued throughout the race by his R-ace GP team-mate Max Defourny, who started alongside him on the front row of the grid after the pair topped their respective qualifying groups.

SMP protege Shwartzman moved his lead above one second with a fastest lap on lap four, only for Defourny to cut the gap again to 0.6 seconds on the following tour.

An even fastest time from Shwartzman a couple of laps increased his advantage to nearly a second, where it remained until the final lap when Defourny closed to within six tenths once more.

Shwartzman is now just two points behind another of his team-mates Will Palmer after the Briton finished in fourth.

Palmer briefly passed Gabriel Aubry for third on lap two down the inside of the Lycee hairpin, but Frenchman Aubry swept back ahead when Palmer ran off-line around Parc Beaumont.

Every driver in the top 10 finished where they started, with Alex Peroni taking fifth ahead of Sacha Fenestraz, Max Fewtrell, Yifei Ye, Raul Guzman and Dan Ticktum.

Henrique Chaves was 13th before swiping the barriers at Pont Oscar as one of a number of drivers lower down the order to come to grief during the race, although slick work from the Pau marshals ensured there was no need for a safety car.

There was an aborted start however after Neil Verhagen?s car ground to a halt short of the grid.