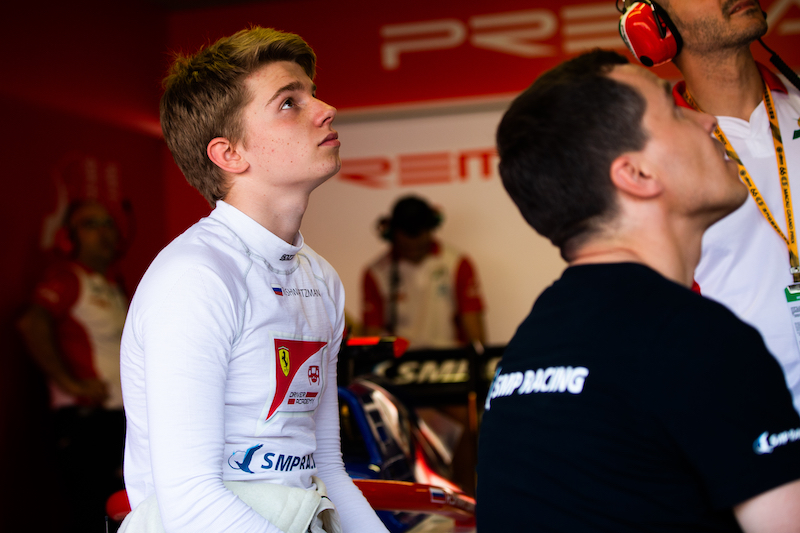 FIA Formula 3 champion Robert Shwartzman will join Mick Schumacher in Prema’s Formula 2 line-up when he steps up to the series for the 2020 season.

Shwartzman raced for Prema in the new FIA F3 series this year, winning the championship ahead of his team-mates Marcus Armstrong and Jehan Daruvala.

The Russian, backed by both the Ferrari Driver Academy and the SMP Racing programme, first joined Prema in European F3 in 2018.

He finished third in the standings while team-mate Schumacher won the championship, as the pair dominated the final part of the season.

“I am really happy to move up to Formula 2 as it is the final step before Formula 1 and obviously a very important one,” said Shwartzman.

“On the other hand, I am delighted to continue my relationship with Prema Racing. It will be the third consecutive year for me with the team, so we know each other well and there is great chemistry.

“Our goal is to win the championship as this year we showed that, even with a new car, a lot of unknowns and high-level competitors, it is possible to be at the front right away. I’m sure we have what it takes to do it all again in 2020.

“I will do my best to learn the tires and car as quickly as possible so we will be at the top of our game from the very beginning.

“I want to thank Ferrari, the Ferrari Driver Academy and SMP Racing for helping and supporting me. I hope to reward their continued trust with some great results.”

Schumacher has had a difficult first season in F2 with Prema. He currently sits 12th in the standings going into the final round in Abu Dhabi this weekend, with his only podium finish so far being a sprint race win at the Hungaroring.

“I am entering my second F2 year with very valuable lessons learned, both in the way to handle the car and tyres but also to work in a bigger team environment,” Schumacher said.

“I will certainly build up on this experience when I go into a season that I cannot wait to start.

“Teaming up again with Prema seems only natural, since we work and grow together since so long now, and I can only thank them for again giving their trust in me. I’ll definitely give anything to prove them right.”

With Shwartzman joining Schumacher at the team, Sean Gelael will leave Prema after two seasons. The Indonesian sits 16th in the current standings with a best finish of sixth.

“We are delighted to announce a really competitive line-up for the 2020 FIA Formula 2 Championship,” said Rene Rosin.

“Shwartzman will move up to the series after being the class of the Formula 3 field this year. We are sure that his swift approach will enable him to gain great chemistry and results right away.

“On the other hand, Schumacher mastered a challenging rookie campaign and already scored his maiden win. On top of that, he has an outstanding potential which will definitely come to fruition.

“We think we can be strong contenders and we can’t wait to start preparations for 2020. We are particularly proud to see drivers grow up in our family until their very last steps before F1.”

Callum Ilott to switch to Virtuosi for 2020 Formula 2 season