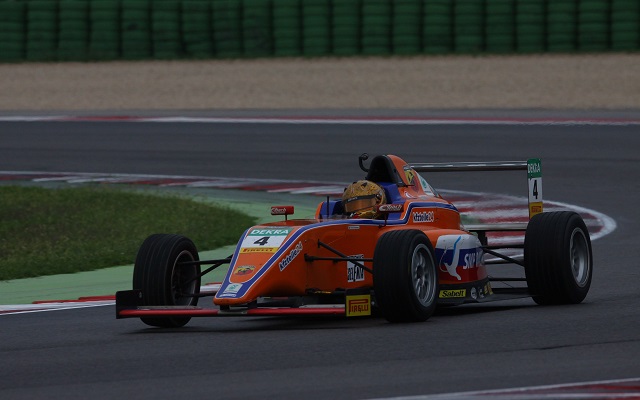 Robert Shwartzman took his third Italian F4 victory of the season in race two at Misano after original race winner Joao Vieira received a time penalty which saw him dropped down to 11th.

The race kicked off with reverse-grid pole-sitter Vieira holding to the lead off the line but giving up the position to Mauricio Baiz before the end of the opening lap.

Vieira did not let the Venezuelan go though and tried to fight back on lap two only to lose another place to Guan Yu Zhou, who snuck past just after passing Bar Baruch.

It was then Zhou’s turn to try to steal the lead from Baiz with the Ferrari junior?making a move just before the duo ran wide, letting Vieira to pass both of them for the lead.

Zhou was soon all over Baiz again and a move with more precision saw him and Shwartzman both getting past.

Just after his overtake, Zhou’s race took a turn for the worse as he slowed and eventually retired.

Meanwhile, Vieira took advantage of the fighting behind to build a safe gap which allowed him to cross the line first, however, the Brazilian was later handed 25-second time penalty for weaving too aggressively during the formation lap.

That allowed Shwartzman to take the win ahead of Diego Bertonelli and Nico Rindlisbacher, who grabbed his first podium in the series after a penalty identical to Vieira’s hit fourth-place Baiz as well.

Ye Yifei ended up ninth ahead of Riccardo Ponzio, who scored his first point in the championship.

Beckmann wins on countback after horror crash with Norris