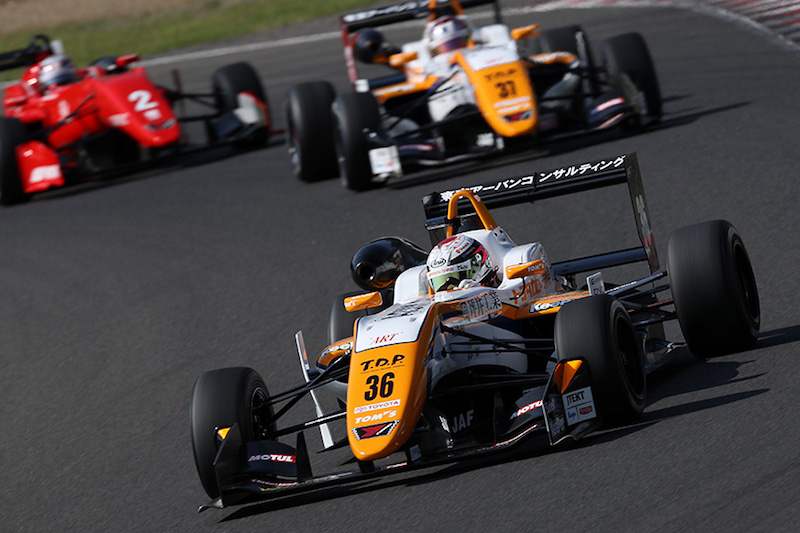 Sho Tsuboi made it four wins out of four at the start of the Japanese Formula 3 season after convincingly winning both races at Sugo from pole position.

After the Team TOM’s driver won both races in the season opener at Suzuka, his Sugo victories put him 16 points ahead of team-mate Ritomo Miyata in the drivers’ championship.

Tsuboi won the first race by 1.742 seconds over his Miyata after getting a good start to help build a gap from the first lap.

Toda Racing’s Honda proteges Toshiki Oyu and Sena Sakaguchi finished third and fourth respectively after qualifying in the same spots for the race. Sakaguchi kept close to his team-mate throughout but wasn’t able to mount a serious challenge for the final podium spot.

The final points positions went to former European racers Ukyo Sasahara and Yu Kanamaru in fifth and sixth. ThreeBond’s Sasahara was starting to catch the Toda Racing pair in the second half of the race but didn’t have enough time to put any pressure on them.

Race two had Oyu in second place on the grid splitting the Team TOM’s pair with Sakaguchi in fourth.

However Oyu had a bad start off the line, dropping down to fourth and elevating Miyata to second and Sakaguchi to third.

Tsuboi and Miyata started to pull ahead from that point on, and while Miyata wasn’t able to challenge his team-mate, he had a 17.841 gap to Sakaguchi in third at the end of the race.

Oyu had another scare during the opening half race after going wide with Sasahara challenging him, but he was able to keep hold of fourth place.

The final point-scoring position in the race went to Yoshiaki Katayama in sixth, who had a five-second advantage over fellow Mercedes-powered driver Yuuki Nemoto at the chequered flag.

In race one, Katayama had beaten the third driver with a Mercedes engine, Shunsuke Kohno, to seventh place by just 0.026s at the line.