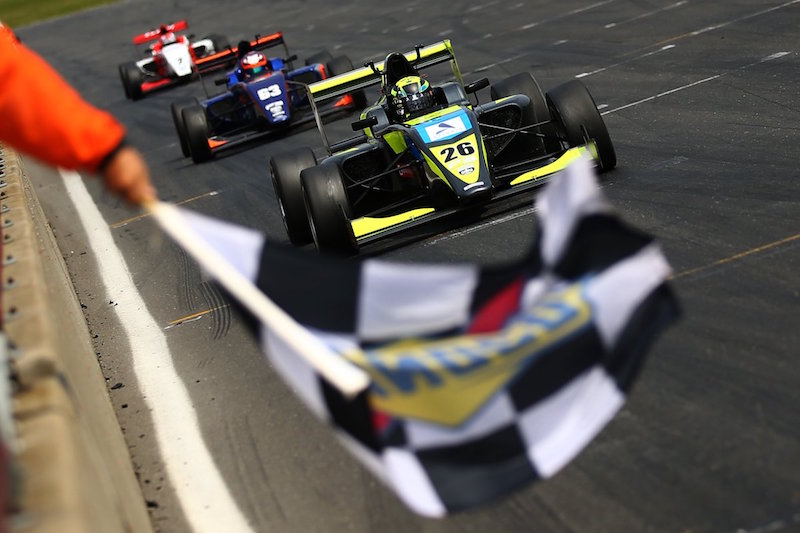 Like at Rockingham last month Lundqvist,?Nicolai Kjaergaard and Kush Maini were the main contenders in the final race of the weekend as well as the first race on Saturday.

There were 1.002 seconds separating the top three at the end of a race that began with Kjaergaard passing Maini at the start for second place.

Lundqvist was then challenged by the Carlin driver, who was victorious in the first race on Saturday, but was able to keep first place to extend his series lead to 30 points.

He was also the only driver out of the trio to make it into the top 10 during the reversed-grid second race. After starting 15th he was able to make it up to 10th by the end of the first lap, and finished the race in fourth position.

The top five for race three was rounded off by Fortec’s Tristan Charpentier and Chris Dittmann Racing’s Harry Webb. Webb had to pit on multiple occasions during the second race, but was able to use his misfortune to bag a fast lap to put him fifth for the third race start.

Carlin’s Billy Monger finished in sixth just behind Webb, with only 0.324s separating the two drivers at the chequered flag.

Jamie Chadwick was further behind in seventh, although both Jordan Cane and Sasakorn Chaimongkol were within a second at the end of the race. Josuf Owega finished up the top 10.

For race two, Fortec’s Manuel Maldonaldo was able to hold onto his reverse grid pole to take his second victory of the season.

Arvin Esmaeili passed Ben Hurst at the start to be Maldonado’s closest challenger, but the Swedish driver fell down to fifth by the end of the race.

The race two podium was filled by Krishnaraaj Mahadik in second place, his first podium finish of the season, with Chaimongkol in third?position.

Owega finished in sixth alongside championship leader Lundqvist in fifth, while Pavan Ravishankar was able to grab seventh place ahead of Hurst in eighth.

The top 10 for the second race was finished off by Monger in ninth and Charpentier in 10th.

Kjaergaard failed to finish race two after both him and Tom Gamble went out on the second lap of the race.