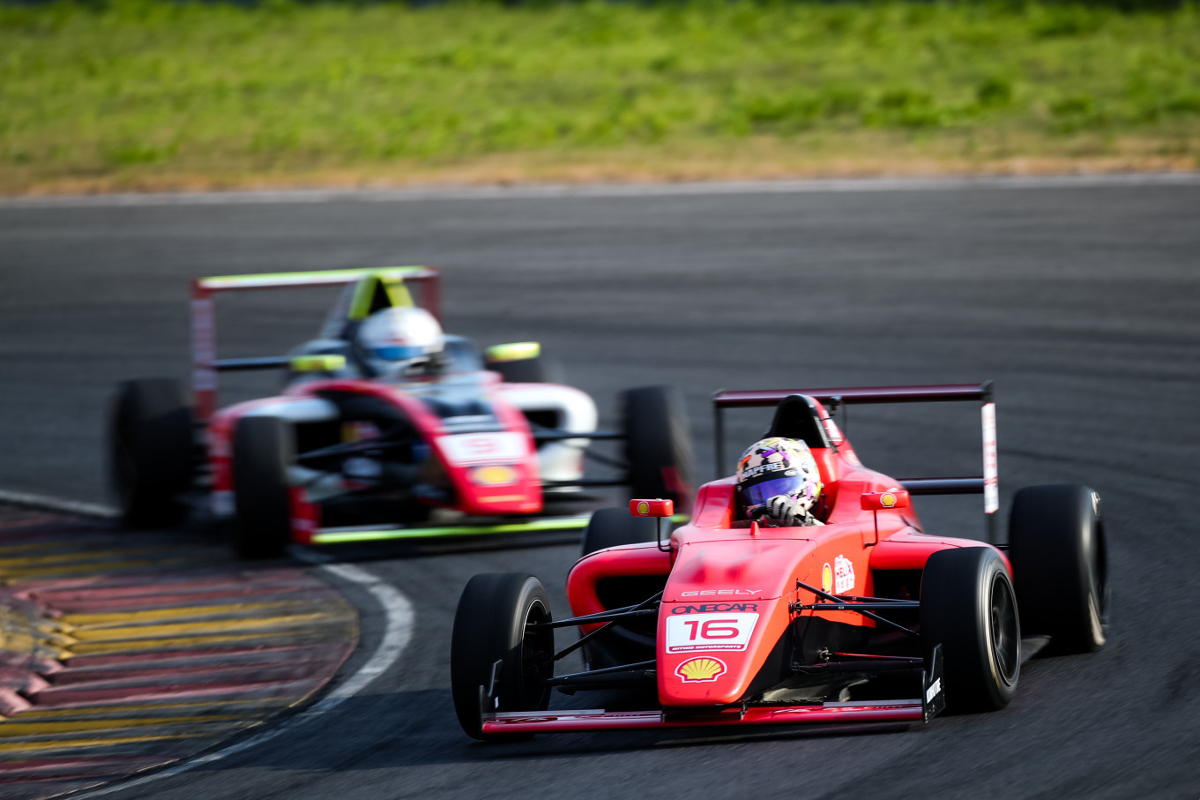 Shenghui Xu leaves the opening Chinese Formula 4 round at Ningbo as points leader after the dominant Gerrard Xie crashed out of the fourth race.

Teenager Xie took crushing wins in Saturday’s two races, and also took pole for race three on Sunday. It was a boring race for him, with all the drama happening at the first braking zone on lap one.

Fourth-placed starter Zedong Wu slid wide after the apex, while Yaoming Huang and Wang Bingxin started sliding before and were already backwards as they reached the corner.

Yang Shengwei tried avoiding them but ended up spinning as he navigated Bingxin’s car and was pushed from behind by Fu Zhenjiang and then hit by Wei Jiang. Zhenjiang was the first to drive away, then Jiang set off with a broken front wing, and finally Bingxin got going too but almost immediately spun due to a rear-left puncture, at which point the safety car was then called out.

Once Bingxin and Huang’s cars were hoisted away, and Jiang had pitted for a new wing, green flag action resumed on lap five. The gaps opened up pretty quickly, with Xie 3.28 seconds clear after two laps, and he finished the 16-lap race with a 16.861s advantage over Xu, who held off Xie’s team-mate Jingxi Lu.

Air temperature had risen to a sweltering 37°C and track temperatures to 62°C for the day’s reverse grid race, and Jiang started on pole.

He led only until Turn 6, as Lu and Xu (from fifth and sixth on the grid) passed him in successive corners, and then Xie came through at the Turn 10 hairpin.

Xie tried attacking Xu’s second place on lap two, and got a pass done at Turn 10. Xu was back ahead at Turn 12, then Xie lunged again at Turn 15, locking up and hitting Xu off-track but getting the move done, just as the safety car was called out as Zhenjiang had stopped on track.

Xie handed back the place, but reclaimed it straight away on the restart only for Xu to pass him again. He got back by at Turn 8, but then locked up and had a race-ending crash into the Turn 10 barriers.

After that, Xu started to pressure Lu for several laps and overtook him for the lead at Turn 10 when Lu locked up and ran wide. He had the pace to then pull away, and claimed the championhip lead with a 4.332s win.

Bingxin battled for third with Wu, and Wu briefly got ahead with a haipin dive on lap 12 of 15 but ran took wide on the exit to keep the position. On the last lap he attempted a dive at the Turn 17 hairpin but collided with Bingxin and spun himself around. Bingxin lost time and Hui Zheng was on his tail through the rest of the lap.

The stationary car of Wu was passed by Huang and Shengwei, who had also had a race-long battle for position.