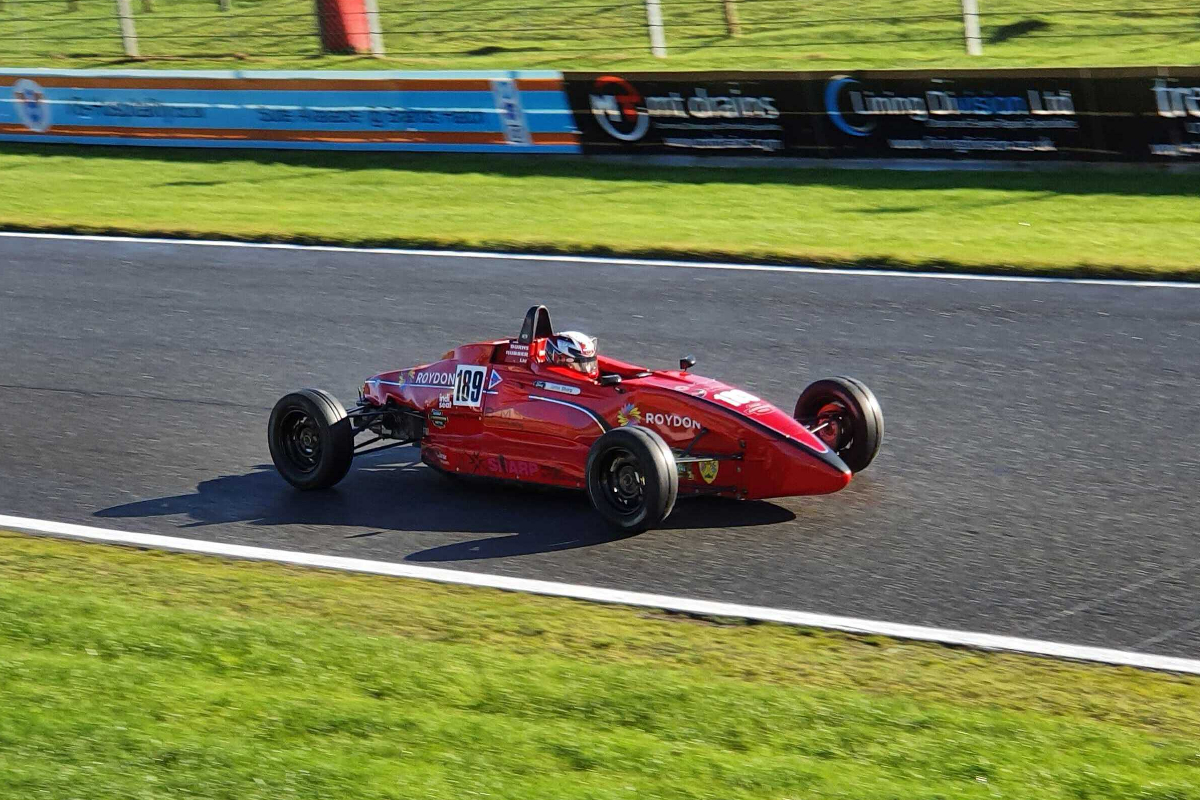 Formula Ford Festival victor Jamie Sharp says his B-M Racing team ‘must have found something’ overnight to give him the winning car for dry conditions at Brands Hatch.

The 20-year-old was surprised by his pace in pre-event testing, which took place in the dry on Thursday and then mostly wet conditions on Friday, but said B-M had “pretty much nailed it so far for the wet” set-up on his Medina Sport JL17.

On a wet Saturday he took pole for his heat and then finished the race in second, just 0.145s from victory, despite two offs and a clash.

“Pretty disappointed in myself – it was ours for the taking,” Sharp said to Formula Scout following his heat performance.

“I did what I did, I’ve just go to not do it tomorrow. If it’s going to be wet we’ve the car for it, I’m comfortable in the wet, so if it’s the same conditions or wetter I’ve just got to keep my head in it and it should be ours.”

He added that B-M “seem to be very far ahead” in the wet, and therefore found Saturday “bittersweet” for not converting his suspected pace advantage into victory.

Torrential rain arrived before Sharp’s semi-final on Sunday, and finishing third put him sixth on the grid for what was a totally dry final besides mud runoff seeping onto some corners.

“I’m pretty sure that we were doing it on the same set-up as Friday testing,” Sharp admitted after winning the final.

“For all I know that was it, and we were struggling with that in testing, so obviously found something…

“In testing, this is the best we have [ever] done this week. Snetterton we were there or thereabouts in the National FF1600 round in testing, but this weekend we’ve been a lot higher than we usually are. I was expecting to be up there in the wet, but in the dry it was a gamble so I’m extremely [happy].”

Sharp battled with Kevin Mills Racing’s Neil Maclennan for victory, and stayed glued to the more streamlined Spectrum down the pit straight before making his winning move.

“Every lap I seemed to [match Neil down the straight]. We must have changed something because I was struggling to get out of Clearways in testing, but we were out of it fine about every time in that race.

“I thought I had lost it when he got past me again. So I just did everything I could have done to get back past.

“It’s always full send. We went into that race thinking we would be happy with whatever we would come out with, so once that crash [between victory contenders Niall Murray and Ollie White] happened I was just going all guns blazing and when [poleman] Joey Foster made that mistake I was like: yeah, this is it.”

Despite his win, Sharp is yet to decide if he will enter this weekend’s Walter Hayes Trophy for FF1600 cars at Silverstone.