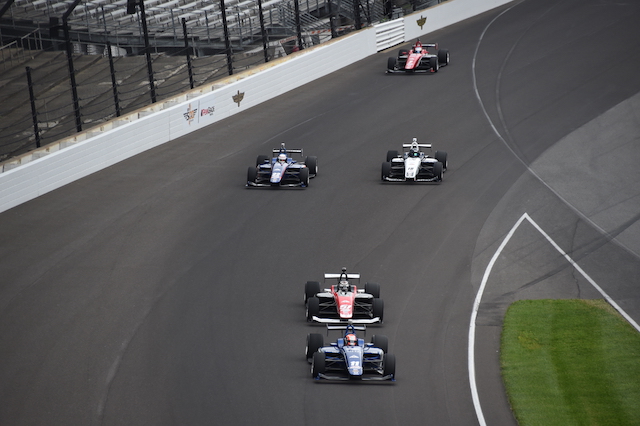 Only eight drivers were able to attempt a qualifying run before heavy rain and thunderstorms forced the cancellation of all on-track activities at the Indianapolis Motor Speedway today.

Before qualifying was cancelled, Jones had set a two-lap average of 197.078 miles per hour (317.166 kph), fastest of the seven drivers that made an attempt. Of those seven, Juncos Racing driver?Kyle Kaiser turned in the slowest average speed, but earns a major reprieve with the field set by championship standings – he’ll start third, next to?Felix Serralles in a second Carlin entry.

The third row will feature the most recent winner,?Dean Stoneman, and?Felix Rosenqvist, both making their first career starts at the 2.5 mile quad-oval.

The last driver to attempt a qualifying run before inclement weather rolled in was Juncos rookie?Zachary Claman DeMelo, who spun and crashed at turn two on his second lap. He was released from the speedway’s infield medical facility with no injuries.