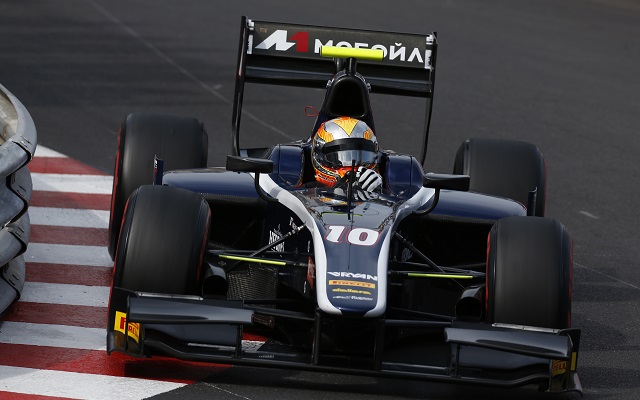 The race kicked off with Norman Nato taking advantage of a sluggish getaway from Sergey Sirotkin.

Although the Russian put pressure on Nato to retake the lead in the early laps, the duo, followed by Jordan King, Mitch Evans and Oliver Rowland, continued to run in an unchanged order.

On lap 18, the virtual safety car had its first of several deployments when Pierre Gasly, who started from the pitlane, hit Jimmy Eriksson from behind, leaving debris on track.

DAMS driver Nicholas Latifi became the first retirement a couple of laps later, having hit the wall while battling with Artem Markelov in the tunnel.

Shortly afterwards, it was Sirotkin following the Canadian as the ART driver went on the kerbs of the second Swimming Pool chicane too hard and crashed into the wall.

Drama continued with Nabil Jeffri damaging his car and then Jordan King hitting the kerbs at Mirabeau and retiring in the pits.

That promoted Rowland, who got ahead of Evans as the Kiwi cut the Nouvelle Chicane while defending from the Briton, into second.

Rowland pitted a lap early for super softs than race leader Nato, the Frenchman narrowly holding onto the lead after a poor pit stop.

After the Frenchman pitted, Markelov remained the only driver, who still had to change tyres.

Having impressively shown superior pace, Markelov looked set to finish well within the top 10 from 15th on the grid and when two consecutive VSC periods, caused by Luca Ghiotto first leaving debris and then retiring at?the hairpin, his situation improved significantly.

Pitting with just three laps to go, the Russian emerged just in front of Nato, who failed to pass him on Markelov’s outlap.

Markelov crossed the line first as a result with Nato and Rowland completing the podium.

Lynn took advantage of the five-second penalty Evans received for his earlier incident with Rowland as Raffele Marciello finished sixth.

Rookies Antonio Giovinazzi and Marvin Kirchhofer will start tomorrow’s sprint race from the front row, having taken seventh and eighth, as Nobuharu Matsushita and Daniel De Jong completed the top 10.