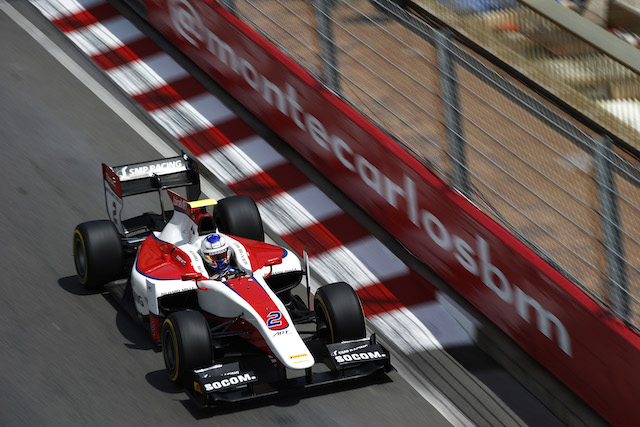 Running in the second of the two qualifying groups for the even-numbered cars, the Russian driver was already sitting on provisional pole when compatriot?Artem Markelov made a mess of the barriers at Ste Devote when he outbraked himself and jumped across the inside of the first corner?just moments after being badly baulked on his previous lap by?Nabil Jeffri.

That brought out the red flags with less than four minutes left on the clock, but the session did resume after 20-minute?repairs to the armco barrier that was?punctured by Markelov.

Putting in?just one flying lap after the restart, Sirotkin was the only one of the leading drivers to improve his time, increasing a narrow gap over second-placed?Jordan King to a half-second margin.

Pole for Sirotkin, one of the pre-season title favourites, comes after he failed to score in the opening round in Barcelona having spun away a podium place?in the feature race. He told his ART team over the radio that they are “back in the game” with the?pole position.

Barcelona feature race winner?Norman Nato will share the front row with Sirotkin after setting the pace in the first group, but the Cannes native – racing with a helmet to commemorate 20 years since fellow Frenchman Olivier Panis?won in Monaco – saw his time bettered in the later segment.

Mitch Evans put a nightmare in Spain behind him to take fourth on the grid alongside King, falling just 0.068s short of beating Nato to the best Group A time.

British drivers?Oliver Rowland and?Alex Lynn will share the third row of the grid while Antonio Giovinazzi took an impressive fourth in the second group on his first ever day on the Monaco circuit. He will line up seventh ahead of?Raffaele Marciello, with another Italian?Luca Ghiotto to start 10th alongside?Nicholas Latifi.

Pierre Gasly?looks highly likely to loose his championship lead after a shocking day. He looked to have suffered from the track?time he lost to his?crash early in practice when he mustered just the eighth best time in Group A. He could yet have to start from the back of the grid should an investigation into missing the weighbridge lead to an exclusion.?Sergio Canamasas – seventh in Group B after sustaining rear-left damage – was flagged up on suspicion of a similar offence.