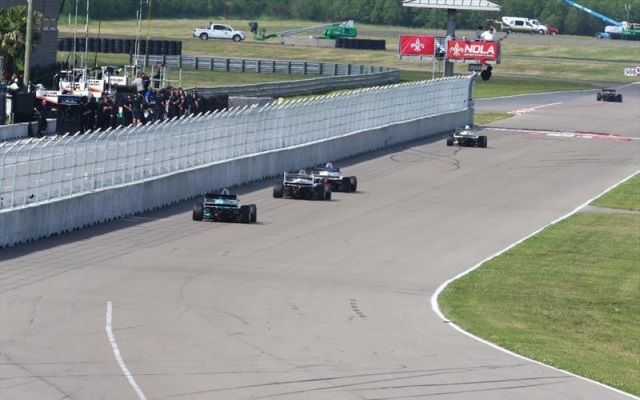 Series organizers have called off the second and final Pro Mazda race of the NOLA Park weekend due to storm hitting the track.

It has been a rainy weekend at Avondale, causing problems for the schedule on both days of racing. Yesterday, heavy rain hit the track right after the USF2000 race, which caused the day’s programme to end prematurely, with Pro Mazda race one postponed and IndyCar qualifying cancelled entirely.

Pro Mazda did manage to get one of their races completed today where victory went to Santiago Urrutia.

However, damp track conditions were made worse by severe storm, causing the Indycar warm-up and second Pro Mazda race to be cancelled for good.

The organizers announced they are looking for a future date when they can run the cancelled event in order to?keep the season at 16 races.

Weiron Tan was set to start the second Pro Mazda race of this weekend from pole, with the Team Pelfrey duo of Patricio O’Ward,?Urrutia and Frenchman Florian Latorre behind him.