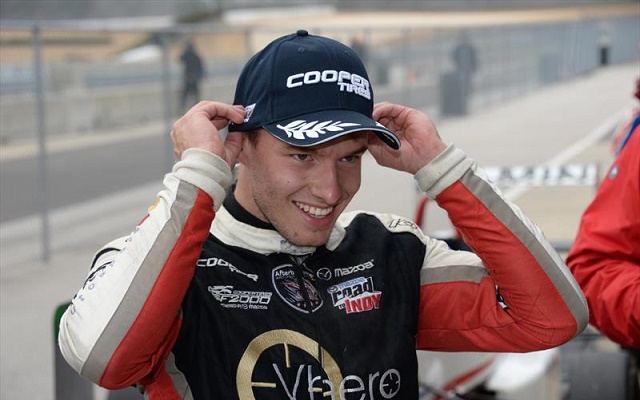 Franzoni took his fifth win between the regular USF2000 championship and the Winterfest as he prevailed on a wet track.

Poleman Aaron Telitz kept the lead off the line but was soon reeled in by Franzoni, while Jake Eidson and Nico Jamin battled for third place.

Franzoni managed to pass Telitz on lap three and, trying to keep up with the Afterburner driver, the American went off at turn seven, beaching his car and causing a full-course caution.

A lengthy interruption followed, with several cars out of position under the safety car, and the race finally got back under green with less than eight minutes to go.

Jamin passed Eidson soon after the restart and ended up right on Franzoni’s tail, giving the Brazilian no room to breathe until the checkered flag.

But Franzoni held on, taking the top step for his first podium appearance of the season.

For Jamin and Eidson, it was a fourth consecutive podium from the start of the season.

Canadian Parker Thompson fought his way up to a personal best USF2000 finish in fourth, first passing Anthony Martin and then forcing Garth Rickards into a mistake.

Martin took fifth, holding off teammate Jordan Lloyd by a tenth of a second.