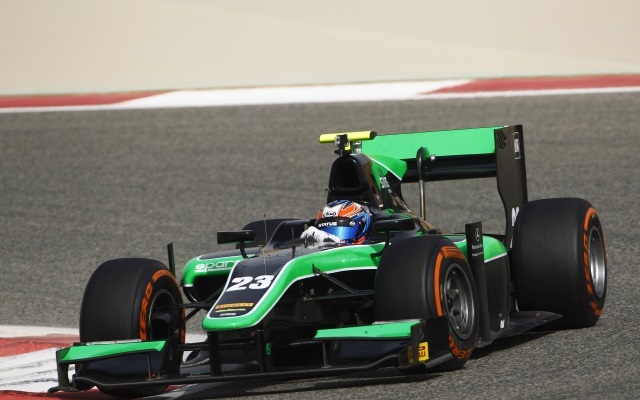 Richie Stanaway?will continue his collaboration with Status GP after being announced to take part in the season opener weekend at Bahrain.

The 23-year-old took part in both pre-season tests with the championship’s sole new team for the forthcoming season, showing great speed by topping a session at Abu Dhabi.

Stanaway has been considered to be a top talent for a long time, having started with lots of success in local championships based in New Zealand.

In 2010, he made his full-time debut in Europe and in the next two years he had massive success by winning both ADAC Formel Masters and German F3, taking 25 victories out of 36 races altogether.

Stanaway was signed by Team Lotus to compete in the 2013 Formula Renault 3.5 and was set to make a name for himself in wider circles but his season was cut short by a back injury he received after an accident at Spa-Francorchamps.

After missing the rest of 2012, he returned to race in Porsche Supercup and World Endurance Championship the following year. 2014 marked his junior single-seater return, joining Status GP’s GP3 line-up. Collecting two victories and five podiums, he ended up eighth in the standings.

?Firstly I would like to thank Teddy [Yip, Team Principal] and David [Stubbs, Head of Operations] for having confidence in my ability and allowing me to drive for Status in their first GP2 race”, said Stanaway. “The series is always tough for rookies but that is part of the appeal, my aim remains to reach Formula 1 and being competitive in GP2 brings me one step closer to achieving that.

?Now that I?ve been given the opportunity to start the GP2 season with Status I just have to keep focussed and drive well. If I’m able to drive in both GP2 and the WEC, which I think really complement each other, it would be the best year of my career so far.

?Having completed all of the GP2 pre-season tests with the team, I know how strong we can be. The engineers have so much experience, it?s a pleasure to work with them and is really confidence inspiring. We seem to work on the same frequency and I?m sure there is no limit to what we can achieve as a team given the chance.?

Teddy Yip, Status Team Principal added: “It’s never easy selecting drivers to represent your team, especially if your aim is to be competitive in Formula 1?s strongest feeder series. Since completing the post-season test in Abu Dhabi for us last year Richie has been our GP2 driver of choice to team up with GP3 race winner Marlon Stockinger and we have been working closely with Richie?s supporters to make this happen.

?There is no question about Richie?s talent as a driver and we have first-hand experience of his commitment and desire to win following our joint GP3 campaign last year. I’m convinced that with the right resources he could be a future World Champion and I sincerely hope we can find a way for Richie to contest the full GP2 season with Status Grand Prix.?

Status will spend their first season of GP2 this year, having taken the slot of the now-defunct Caterham team in the entry list. Stanaway will join Marlon Stockinger for the season opener.

Only thee free seats have been left before this weekend’s season start, MP Motorsport and Hilmer have one and two drivers yet to be named respectively.