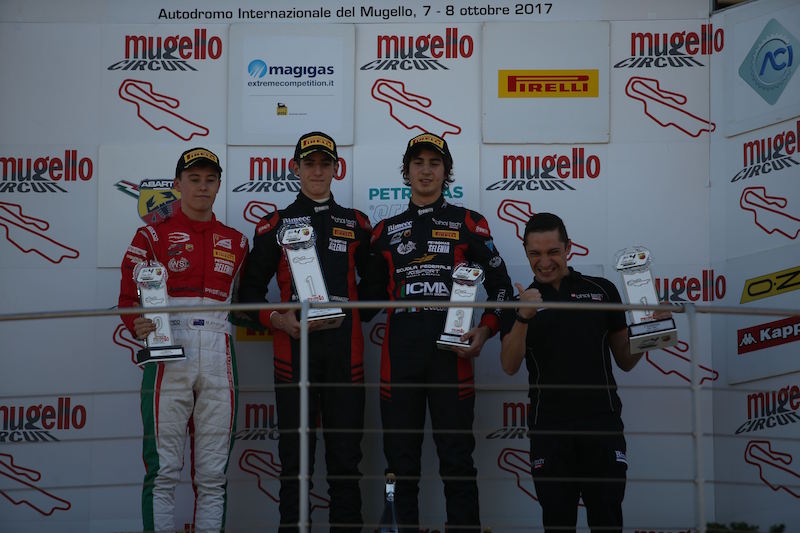 Sebastian Fernandez took his first Italian Formula 4 victory since his opening-round hat-trick in the first race at Mugello.

Fernandez was forced to defend against championship leader Marcus Armstrong off the line, but quickly shook off the Ferrari protege and was unchallenged for the remainder of the race.

He finished three and a half seconds ahead of Armstrong to take his fourth win of the year.

Hoping to close the gap to the top of the championship order, Lorenzo Colombo jumped past team-mate Leonardo Lorandi at the start and set about chasing after Armstrong.

He spent most of the race on the tail of the Prema Powerteam car but was never close enough to make a move, finishing third.

An amazing start allowed Lirim Zendeli to jump up the order to sixth, ahead of Artem Petrov. The DR Formula driver fought back, allowing Job van Uitert to close in, making it a three way fight for the position. Petrov found a way back through and left Zendeli to battle with the championship contender.

Petrov closed in on Enzo Fittipaldi, who had fallen away from Lorandi. Fittipaldi defended hard, but Petrov kept up his attack until the chequered flag, finishing four tenths of a second behind the Prema driver.

Zendeli kept van Uitert behind him to take seventh, allowing Armstrong to extend his championship lead to more than 30 points.