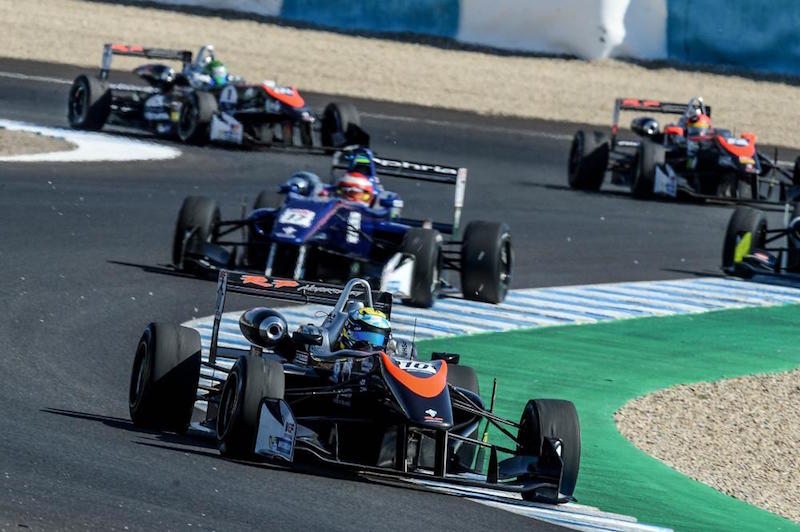 Pre-race predictions of difficulties in overtaking proved to be correct at Jerez as 2017 Euroformula Open champion Harrison Scott took his eleventh victory of the season.

Scott?s greatest challenge came in qualifying, when his initial pole lap was disallowed due to a Pedro Cardoso-caused red flag.

With less than three minutes to go Scott only had one opportunity to set a lap, and he delivered under pressure to take his tenth pole of the season.

Nikita Troitskiy, who leads the seven car battle for second in the standings, was the main benefactor of Scott?s first time being disallowed but was unable to better his own time after being blocked by Daniil Pronenko.

He ended the session fourth, with Devlin DeFrancesco and Simo Laaksonen second and third.

Laaksonen had a disastrous start, dropping to eighth, giving Troitsky a clear run to third going into the first turn.

From then till the flag there was no change in position on the podium, and Scott ended the race 2.3 seconds ahead of DeFrancesco.

?Following the GP3 and F2 rubber has kind of changed the car a lot. Qualifying this morning was tough as well with the red flag in between on the good run. So it was a bit kind of compromised then, but to get a win out there is brilliant.?

There were two safety car appearances, and Scott handled the restarts perfectly both times. De Francesco wasn?t caught out behind though, and his fifth podium of the season and Rookie class win was well deserved.

Ameya Vaidyanathan finished fourth after occasionally hassling Troitskiy, with Jannes Fittje finishing fifth and round off the rookie podium behind Troitskiy.

A last lap move by Laaksonen meant he beat Alex Karkosik to sixth, with Ben Hingeley in eighth after a mistake-heavy race.

Thiago Vivacqua, Lodovico Laurini and Daniel Lu all ended their races in the gravel, with the crash involving the first two drivers bringing out the first safety car of the race.

Lu?s incident, which also involved Petru Florescu, caused the second appearance of the safety car and led to the retirement of both drivers.

Cardoso was the only other driver not to finish the race, following his qualifying crash with a pitlane start then an early exit due to an unspecified mechanical problem.