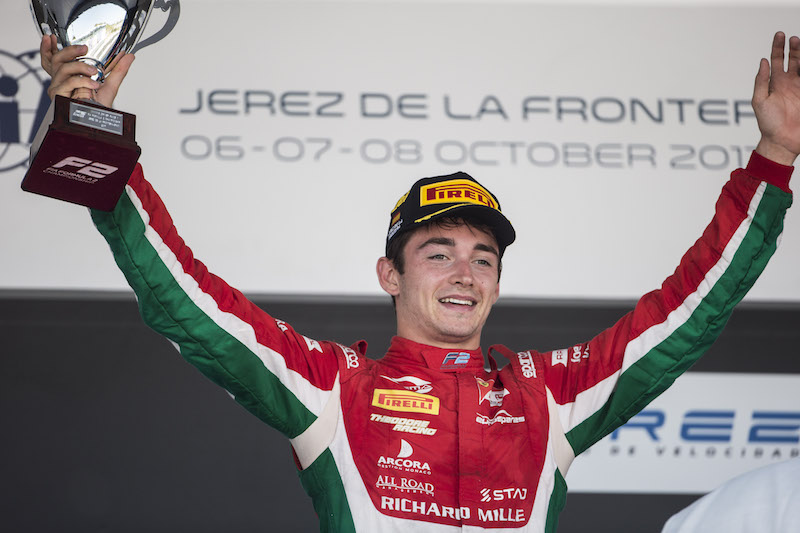 Charles Leclerc secured the Formula 2 title after taking victory in the feature race in Jerez, despite a late safety car and pressure from Oliver Rowland.

DAMS driver Rowland had a poor start from fourth on the grid, while polesitter Leclerc made a good start and held his lead.

There was no pressure applied to Leclerc in the early stages of the race, while Rowland had to fight his way through.

Despite falling to fifth at the start, Rowland made his way back up the field and was third on lap 11.

The British driver then passed Luca Ghiotto for second place, but Leclerc was 11s up the road.

Both drivers pitted a lap later and Leclerc?s almost-12s lead was enough to put Sergio Sette Camara and Alex Albon between himself and Rowland.

Rowland?s fresh tyres allowed him to quickly pass Sette Camara and Albon for fourth, while Leclerc was second.

The gap continued to come down and, by lap 24, was down to 5.4s between first and second ? Leclerc and Rowland at this point.

Nobuharu Matsushita and Santiano Ferrucci collided on lap 32 to bring out the safety car. Racing resumed on lap 35 of 39, with lapped driver Sean Gelael in between the two rivals.

Rowland passed Gelael on the restart but was unable to overtake Leclerc, crossing the line just 0.2s behind the race winner.

Antonio Fuoco, who carved through the field on the restart using his fresh tyres, was third and only 0.9s off teammate Leclerc.

Nicholas Latifi was fourth, ahead of Artem Markelov, Jordan King and Luca Ghiotto.

Nabil Jeffri scored his first points of the season with ninth, just ahead of Sette Camara.