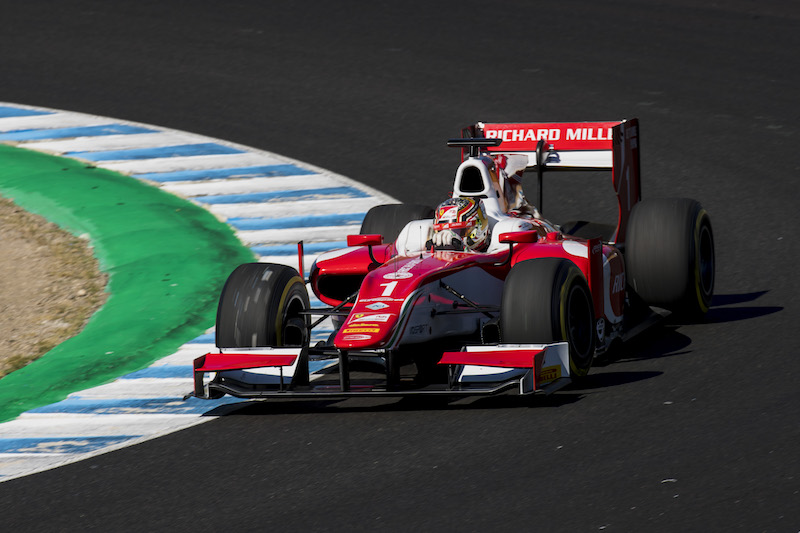 Charles Leclerc took his eighth pole of the Formula 2 season at Jerez, moving him ever closer to the title.

The Monegasque racer has now equalled the record tally of poles that Stoffel Vandoorne and Pierre Gasly achieved when F2 was known as the GP2 series.

Luca Ghiotto was Leclerc?s closest rival during the qualifying session, and the pace of the Italian actually led to Leclerc changing his strategy to do another run on the soft Pirelli tyres late in the session.

?We did this strategy [reacting to Ghiotto] because here in Jerez it?s quite difficult to overtake,? explained Leclerc.

?We want to win the championship this weekend so we have maximised our chances by doing a good qualifying to be well placed in Race 1. Now we have to work on the start and make sure we keep it tomorrow.?

An end margin of over a quarter of a second was the result of his final run, and the four points that come with it puts Leclerc 63 ahead of DAMS driver Oliver Rowland going into the feature race.

Rowland could only manage fourth on the grid, over six tenths behind Leclerc, and to prevent the championship leader from winning the title he will need to be outscored by no more than two points in the race; not possible if Leclerc wins from pole.

Between the front row pair and Rowland was Sergio Sette Camara, who but in his best ever qualifying result for MP Motorsport.

Artem Markelov, who like Russian Time team-mate Ghiotto still has an outside chance of winning the title, qualified fifth, ahead of ART Grand Prix team-mates Alexander Albon and Nobuharu Matsushita, Racing Engineering?s Nyck de Vries and Nicholas Latifi; the most distant of the title contenders.

This quintet was covered by 55 thousands of a second, and a further five drivers were within a second of Leclerc.

F2 debutant Alex Palou was 11th for Campos Racing, over a second faster than this team-mate, while returnee Rene Binder ended 17th for Rapax.