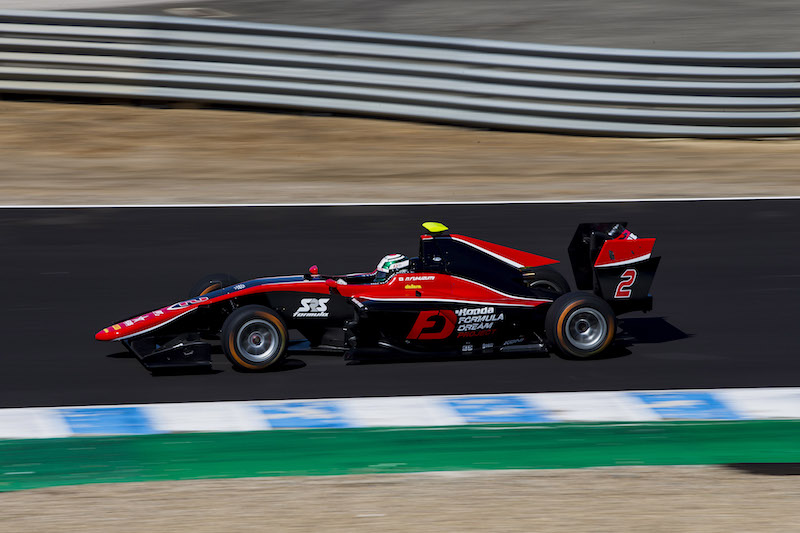 Nirei Fukuzumi kept his small title hopes going with a second straight GP3 pole of the season at Circuito de Jerez, with title rivals and team-mates Jack Aitken and George Russell lined up just behind.

ART Grand Prix were the fastest team around Jerez, and it was Aitken leading a intra-team 1-2-3-4 after the the first qualifying runs were completed.

Russell looked to be the pacesetter when the cars went out a second time, but as the first of the ART cars to cross the line he failed to reap the benefits of the track rubbering in.

Aitken and Fukuzumi both set laps after the chequered flag fell, and were quicker than their championship-leading team-mate.

Fukuzumi?s pole was the first time he?d topped a qualifying session since the second Twin Motegi Japanese Formula 3 round in 2015, with his pole at the previous GP3 round at Monza having come after qualifying was rained off and practice times set the grid.

?I?m very happy with today?s pole position. I drove the best that I could this afternoon. I was able to put everything together for that lap and it was good enough for pole,? Fukuzumi said.

?[At Monza] I was lucky and yes also happy to get pole then, but this time, I set it on the track during the qualifying session so I am really, really happy.?

The four points for pole mean Fukuzumi is now 59 points behind Russell, with 92 still available.

ART were denied a clean sweep of the front two rows after Red Bull junior Dan Ticktum put in a stunning lap to go fourth in his first ever GP3 qualifying session for DAMS.

Anthoine Hubert in the fourth ART car was fifth as a result, with Alessio Lorandi sixth before a three-place grid penalty was handed to the Italian for impeding fellow countryman Leonardo Pulcini.