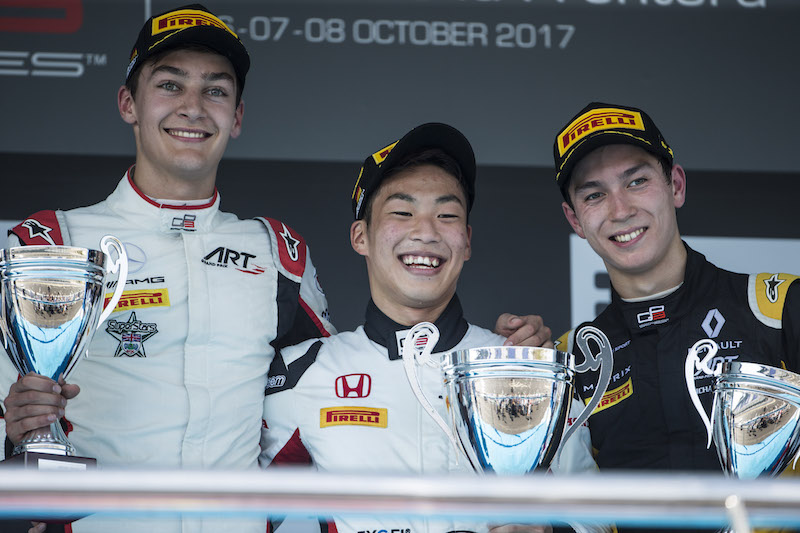 Nirei Fukuzumi took his second win of the GP3 season in the first race at Jerez, as championship leader George Russell claimed second.

With little tyre degradation and very few overtaking spots around Jerez, the first lap was the focus of most of the action.

Fukuzumi got a clean run from pole position, with ART Grand Prix team-mates Jack Aitken and Russell battling just behind.

Russell made his move for second at Turn 2, cutting onto the kerbs on the inside and using up all of the road on the exit to demote his team-mate and title rival to third.

From then on the three ART cars ran in a line, with Dan Ticktum keeping close eyes on them from fourth in his DAMS-run Dallara.

In the final few laps the quartet started to spread, and they ended the race separated by just over five seconds.

Russell?s lap one manoeuvre means his championship lead over Aitken stands at 44, with 65 still available. Fukuzumi is a further eight points back and needs to outscore Russell by four points to head to the Abi Dhabi finale in title contention.

?I am so happy to win the race today. It?s been too long,? said the winner.

?The race was quite a simple one: I had a good start, nothing special. The degradation was not so high for me and I could manage my pace.?

?This win today means a lot. I?ve overcome all of the obstacles and it makes me very, very happy.?

Russell explained: ?I knew this circuit was going to be difficult to overtake so I knew if I wanted to pass Jack I needed to do it as soon as possible.

?I saw an opportunity at Turn 2. Luckily, I made it stick and it was a fairly simple race from there really. As Nirei mentioned, we didn?t know how tyre degradation would play out so I just managed the gap and settled for second.?

Ticktum?s 12 points for fourth were his first in his short time in GP3, and were a good birthday present for DAMS boss Jean-Paul Driot on what was otherwise a frustrating day for his team.

The fourth ART car of Anthoine Hubert knocked himself out of title contention with a fifth place finish, with Niko Kari and Dorian Boccolacci in sixth and seventh.

Eighth place changed hands on the final lap, but the position change was reversed post-race by a steward decision.

Giuliano Alesi, who had been hounding Alessio Lorandi for several laps, found a way alongside the Italian on the straight between the fifth and sixth turns.

Lorandi defended aggressively, leaving less than a car width for Alesi and receiving wheel-to-contact as the Frenchman moved back across so he could make the corner.