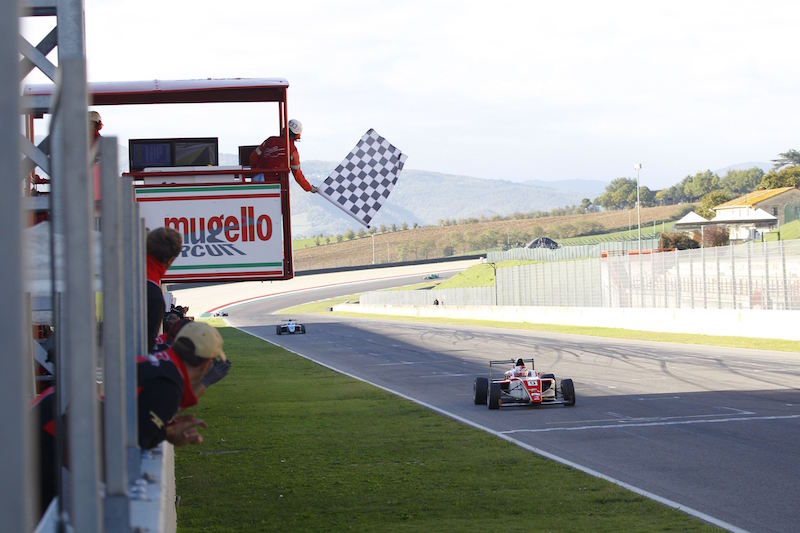 Marcus Armstrong extended his Italian Formula 4 championship lead with a clear-cut victory in race two at Mugello, although Job van Uitert minimised the damage with his fourth second place finish of the season.

Van Uitert was close behind Armstrong on the opening lap before a safety car for Lorenzo Colombo?s stricken car neutralised the race.

Armstrong made the best restart of the two, leaving his championship rival to battle with Leonardo Lorandi.

Van Uitert spent most of the race trying to keep the rookie behind, but eventually managed to pull out a gap to Lorandi.

It was too late for him to catch Armstrong, more than two seconds up the road, though, and he finished a comfortable second.

Kush Maini and Ian Rodriguez spent the early part of the race swapping positions behind the podium battle.

With 10 minutes left on the clock, Rodriguez had the upper hand, but ran wide, allowing Maini to slip back past.

Maini pulled away from Rodriguez and was putting Lorandi under pressure for third in the closing stages of the race. He was running side by side with the rookie on the final lap, but couldn?t make the move stick.

Race one winner Sebastian Fernandez had been running sixth before making contact with Gregoire Saucy behind him. Both cars were damaged and Fernandez was sent into the gravel and out of the race.

He was the third driver to end their race in the gravel traps. After Colombo ran wide on the opening lap, putting himself in the barriers, a lock up for Artem Petrov sent him through the gravel and out of the race on the first lap after the restart.

Lirim Zendelli inherited sixth after a stunning comeback drive. The Mucke Motorsport driver had collided with Enzo Fittipaldi at the first corner of the opening lap, sending both through the gravel and to the back of the field.

Zendelli quickly picked his way back up through the order, running around the outside of what was, at that point, a four-way battle for eighth to snatch the position.

He finished ahead of Saucy and Felipe Braquinho. Prema Powerteam duo Lukas Dunner and Fittipaldi rounded out the top 10.

The race ended with drama for Giacomo Bianchi, who span through the gravel at high speed on the final lap. He collided with the barrier and was sent bouncing back onto the track, but avoided contact with any other car.