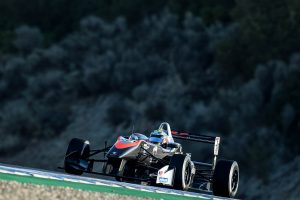 The RP Motorsport driver beat Sandy Stuvik?s tally of 11 wins in a season from 2014, and his 13th podium of the season also means he breaks the record for most podiums in a rookie season.

Scott was unchallenged from pole and did his usual trick of putting a second between himself and second place within the first lap.

From then on he was unsighted, and he ended the race over six seconds clear of anyone else.

?Managed to get off the line really well and from then I pushed 100% the whole way, and the car underneath me was brilliant. The work that car has put in over the weekend; It was tough coming here. The new tarmac made it tricky but the car just got better and better throughout the whole weekend.?

Nikita Troitskiy took the Rookie win and title with his sixth second place of the season after a race long battle with Devlin De Francesco, and has now all but secured second place in the overall standings.

Jannes Fittje finished fourth after pressuring Eliseo Martinez into a mistake midway through the race, but the Teo Martin Motorsport driver still equalled his best result of the season in fifth.

Simo Laaksonen finished close behind in sixth, with Alex Karkosik heading Cameron Das, Tarun Reddy and Petru Florescu at the bottom of the points.

Outside of the points a strange event occurred on the penultimate lap as Pedro Cardoso lost power on the exit of a corner, leading to Daniel Lu rear-ending him. Lu managed to make it to the end of the race without too much damage, while Cardoso retired on the spot.

Ameya Vaidyanathan had been running eighth until he too had an issue on the penultimate lap. The Indian ended his race early by running wide and beaching himself in one of Jerez?s gravel traps.

The resultant lack of points means he drops to fifth in the standings, with Fittje and De Francesco moving up to third and fourth. Fittje sits 54 points behind Troitskiy, with the same amount available at the Barcelona season closer in three weeks? time.