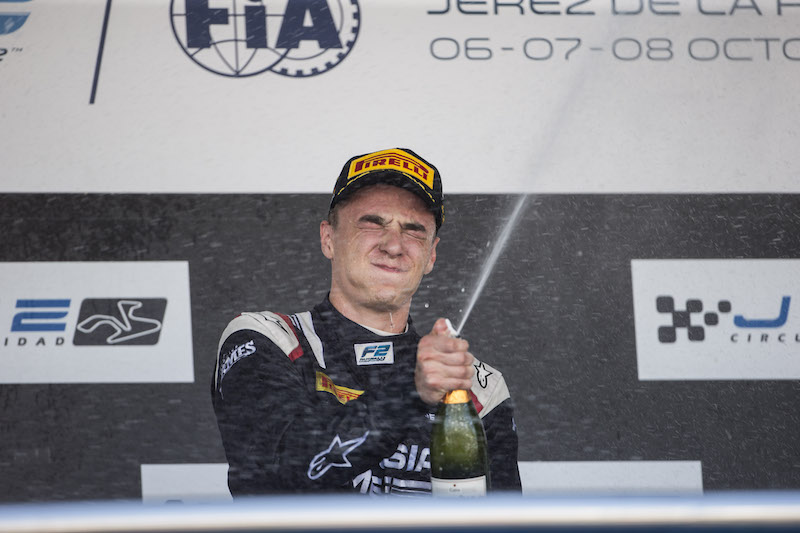 Artem Markelov took the Formula 2 sprint race victory at Jerez after a late charge through the field.

The Russian Time driver started fourth and managed his tyres to take victory ahead of DAMS drivers Nicholas Latifi and Oliver Rowland.

Markelov?s margin of victory was 11.8s across the line, despite only leading for the final five laps.

The Russian driver got past Latifi for second place on lap 23, using DRS to his advantage down into Turn 1. On the same lap, he used DRS in the second zone to pass polesitter Alex Palou into Turn 6.

The second move was a late move to the inside of the corner, which Palou defended hard, forcing Markelov to just put his wheels on the dirt.

Once Markelov was ahead, he bolted away at the front.

Latifi and Rowland both got by Palou on the next lap, securing a double podium finish for DAMS.

Luca Ghiotto finished in fourth place, despite being forced off the road and into the gravel at Turn 2 by Jordan King.

Ghiotto re-joined in 14th?place but fought his way through the field to finish just 1.4s off Rowland in third.

Antonio Fuoco came home in fifth place, with teammate Charles Leclerc in seventh. Both Prema drivers made a pit stop during the race, switching to the soft tyres.

Leclerc was running as high as fourth going into the final lap but was passed by Fuoco, Ghiotto and De Vries.

Polesitter Palou finished eighth, despite leading for most of the race on his debut weekend in F2.