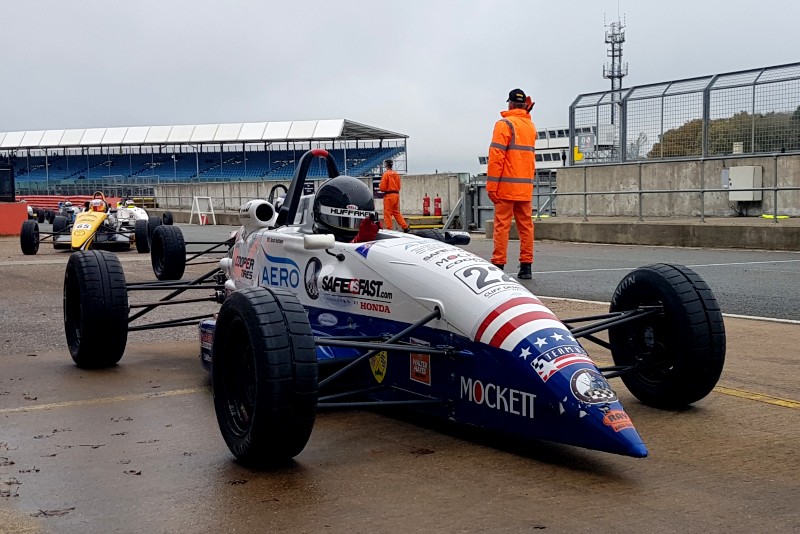 Team USA scholar Scott Huffaker prevailed in a five-car battle for the lead to win the first Walter Hayes Trophy semi-final at Silverstone.

Starting in second alongside Oliver White, the Cliff Dempsey Racing driver swept into the lead at Brooklands on the opening lap and ? despite briefly losing the lead on the following lap ? maintained the position thereon.

It wasn?t through lack of challenge though, as Team Dolan’s Matt Cowley nosed ahead going into Copse on the final lap, but Huffaker held firm going into Becketts with the pair clashing wheels as he forced his way back ahead. The tangle sent Cowley onto the grass on the outside of the corner, losing a handful of positions to cross the line seventh.

Also losing positions was White, who was hit by Huffaker’s team-mate Josh Green going through Copse on lap eight of 12 after the latter took the wet line through the corner and understeered into the Souley Motorsport driver.

White was able to finish in 17th, squeezing into the final made up of the top 18 from each semi-final, but Green was forced into retirement.

The chaos ahead allowed Luke Cooper rise from fifth on the grid into second place ? just 0.164s off victory ? having utilised the slipstream from what at times was a five-car scrap for the lead.

Third went to Myerscough College’s Jack Wolfenden, who didn’t have time to challenge for the lead having prevailed in a battle with Ivor McCullough for fourth on the penultimate lap – before benefiting from Cowley?s off.

Team DDR’s McCullough took fourth by 0.099s, with Kevin Mills Racing’s Michael Moyers making a remarkable rise from 26th on the grid to finish fifth ? ensuring a top 10 start for the final.

Morgan Quinn led Dolan team-mate Cowley in sixth, the inexperienced Ian Campbell was eighth, while John Svensson and Ben Tinkler, in an older car, rounded out the top 10.