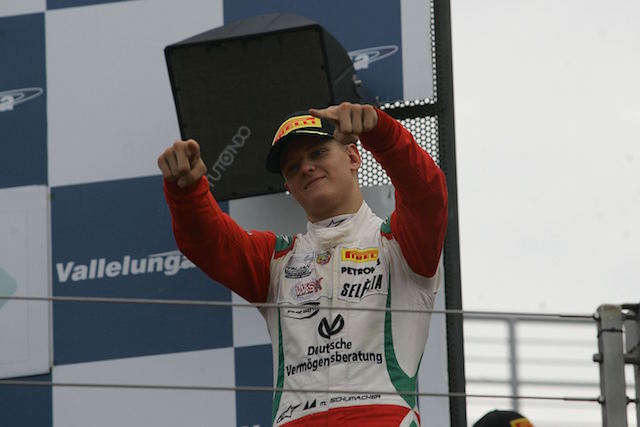 Mick Schumacher closed to within 10 points of the Italian Formula 4 lead at the Vallelunga round, as he,?Raul Guzman and?Juan Correa shared the wins.

The first race was one of tyre strategy, with DR Racing drivers Guzman and?Artem Petrov correctly picking wet tyres to finish first and second with Schumacher, poleman?Juri Vips?and Correa settling for third, fourth and fifth after their Prema team went for slicks.

Race two was held in dryer conditions, with Schumacher grabbing the lead from Vips into the first corner and beating his team-mate to the line by seven tenths. Ex-Prema driver?Giuliano Raucci completed the podium.

Having finished 10th in race two after contact, Correa led the final race from reverse-grid pole to chequered flag for his third win of the season, but?Schumacher finished just eight tenths behind him from 10th on the grid.

That was despite a lengthy safety car period after Guzman stalled and was collected by?Joao Vieira.

Schumacher has been playing catch-up to?Marcos Siebert since Prema opted to skip the second round, but the Argentine now leads by only 10 points with two rounds remaining after claiming a sixth, a fifth and another sixth during the weekend.