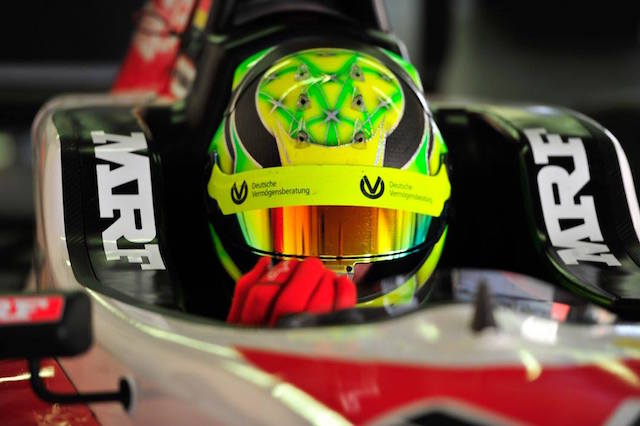 Mick Schumacher and Harrison Newey took dominant wins on the second and final day of racing in the MRF Challenge round at the Buddh grand prix circuit near New Delhi.

Schumacher was poised to eat into?Joey Mawson‘s points lead after a race four clash?with the Australian, only to then spectacularly crash out himself.

The German had finished four seconds clear of Mawson in the first race, able to pull away from pole position as Newey got a poor getaway from second.

This allowed Mawson into second, and though Newey briefly got back ahead down the long back straight, the ADAC Formula 4 champion brilliantly sold him the dummy under braking to dive down the inside.

Mawson had to defend hard from Newey over the following laps, but gradually pulled away.

Felipe Drugovich was a distant fourth in front of Carlin USF2000 signing?Rinus van Kalmthout, Juri Vips,?Pedro Cardoso and?Ralf Aron, who was put up onto two wheels and wide at the first corner.

Aron started the final race from pole, but Newey got the better start to take the lead, while behind, Mawson got the jump on Schumacher to get third.

At the restart, Schumacher dived down the inside of Mawson at the tight Turn 3, with the pair banging wheels and Mawson being forced through the gravel and falling to ninth.

On lap nine of 12, Schumacher attacked Aron at the same place, but with both drivers forced wide, Drugovich was able to grab third.

Down the straight, Schumacher got a run on Aron and appeared to have secured the place down the inside, but he struggled to get the car slowed and slammed into an innocent Drugovich as the Brazilian turned in from wide on the racing line.

Newey had a large lead eliminated by another safety car, but this remained out until the chequered flag.

Aron got second place, while Mawson was able to salvage third, meaning he is now 27 points clear of Newey in the standings and 40 in front of Schumacher.