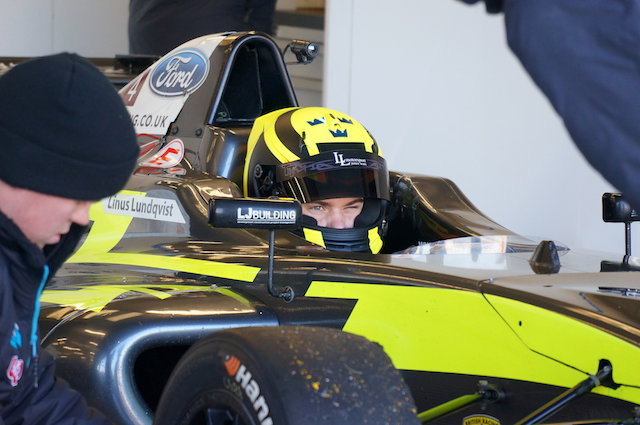 Swedish racer?Linus Lundqvist will move to British Formula 4 with Double R Racing this year after winning the Formula STCC Nordic title in 2016.

Previously a competitor in European and World championship karting, Lundqvist finished fourth in the Formula Renault 1.6-based Formula STCC series in 2015, before taking 10 wins from 14 races on his way to the title last year.

?It?s great to be able to take this step and to measure myself against the competition in the F4 British Championship,? said Lundqvist.

?This has been my target since winning the Formula STCC Nordic title last autumn, and I’m equally thrilled and grateful that we’ve made this happen along with Double R Racing.

“To be competing in single-seaters in Britain, in the heart of motorsport, is definitely a dream come true for me.”

The 17-year-old has tested the Mygale-Ford British F4 car on three occasions this winter and has topped the times on each occasion.

?Testing has been very, very positive,” he said. “It was all brand new to me ? the car, the track, the tyres and the team ? but the guys at Double R Racing have been fantastic and really helped me to acclimatise.

?This will be a big challenge for me, having only raced on the narrow tracks in Scandinavia, but I hope to be fighting for wins before too long.”

“Testing went incredibly well. He turned up for the first time at Silverstone, a tough track with a lot of fast corners, and he immediately set the pace.

“He comes highly recommended by some people and I firmly believe that we’ll be running right at the front with Linus this year.

“I’d expect us to fight for race wins and the title, and we’re all excited to have Linus on board.”